Analysis of the BOM Annual Report.

The Bureau of Meteorology 2011 Annual Report. (LINK)
Guest post by Anthony Cox
What is going on with science information in this nation? It is this information from the BOM and CSIRO which provides justification for the introduction of the various anti global warming policies. So how reliable is this information from our two premier scientific research institutions?
In its 2011 report the BOM says:
“Australia was the only continent to record cooling and the nation’s 10-year average trend was still up”
This is a statement which is misleading in what it doesn’t say. For instance, the 10 year average temperature trend, based on the BOM’s own data, from January 2002 to December 2011, is this: 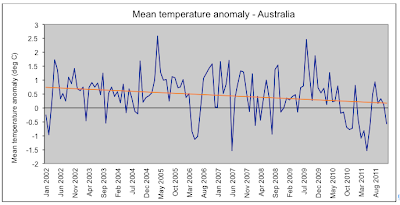 Clearly, the trend is down over this period regardless of whether this 10 year period is warmer than the preceding 10 year period.
In respect of Australia being the only continent to experience cooling over 2011, how then to explain this:
As can be seen the trend in the Global Average Temperature [GAT] is clearly down and that in 2011 GAT fell markedly. This down trend is clear in both the land based temperature [green] and the satellite temperature [purple]. How can Australia have been the only continent to cool in 2011 when GAT shows the whole world cooled?
The BOM is also reported as saying:
“Ocean temperatures – the warmest on record over the past two years – had actually assisted Australia’s heavy rainfall and cooler temperatures”
The clear implication from this is that the ocean is warming; it is not:
As can be seen there was a spike in the world’s sea surface temperature in 2009-2011, which is consistent with the BOM statement, but what is also plain is that the overall trend in sea surface temperature, over the last 10 years is down, further contradicting global warming.
It would appear that the only damage that global warming is causing is to the reputations of Australia’s scientific institutions.
Posted by Geoff on January 06, 2012 6 comments: 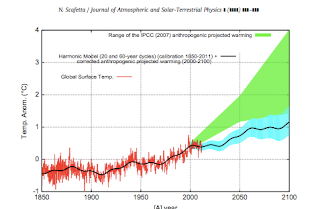 From the Abstract:
We compare the performance of a recently proposed empirical climate model based on astronomical harmonics against all CMIP3 available general circulation climate models (GCM) used by the IPCC (2007) to interpret the 20th century global surface temperature. The proposed astronomical empirical climate model assumes that the climate is resonating with, or synchronized to a set of natural harmonics that, in previous works (Scafetta, 2010b, 2011b), have been associated to the solar system planetary motion, which is mostly determined by Jupiter and Saturn. We show that the GCMs fail to reproduce the major decadal and multidecadal oscillations found in the global surface temperature record from 1850 to 2011.

The scientific method requires that a physical model fulfils two conditions: it has to reconstruct and predict (or forecast) physical observations. Herein, we have found that the GCMs used by the IPCC (2007) seriously fail to properly reconstruct even the large multidecadal oscillations found in the global surface temperature which have a climatic meaning. Consequently, the IPCC projections for the 21st century cannot be trusted.


It’s not a secret that the IPCC models are all rigged to make CO2 look like the culprit for the last 150 years of warming. We say this because we now know their models completely ignore, or selectively distort, the potency of an array of drivers and amplification mechanisms.
In the paper, according to the abstract, Scafetta compares the performance of a recently proposed empirical climate model based on astronomical harmonics against all CMIP3 available general circulation climate models (GCM) used by the IPCC (2007) and finds that the climate appears to be resonating with, or is synchronized to, a set of natural harmonics that have been associated to the solar system planetary motion.