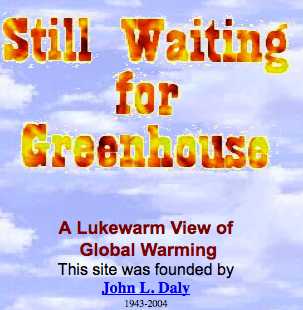 When most of the world was taken in by the Climate Change Hoax, John Daly was writing a blog called Still waiting for the Greenhouse. (LINK) He was such a thorn in the sides of the alarmists that, upon Daly's death in 2004, the ClimateGate emails reveal that the Chief Scientist at CRU, Phil Jones wrote


Daly was a pioneer in the questioning of global warming theory when the rest of the world was taking little interest in the issue. In the year the IPCC was formed under the shelter of the UN (1988), and a year before Margaret Thatcher gave the IPCC her blessing, Daly was writing a scathing book on what he called the myths and politics of the Co2 scare campaign.

Another who was aware of the errors from the beginning was Vincent Gray, whose NZ Climate Truth emails are regularly published in these pages. In 2002, Gray, who has a Ph.D. in physical chemistry from Cambridge University published a book, The Greenhouse Delusion: A Critique of "Climate Change 2001". He has been an Expert Reviewer for the IPCC's Assesment reports.

Data compiled by Karl (1998) of the temperature changes between 1901 and 1996 for 5°x5° grids on the earth’s surface, have been divided into smaller regions than those used by him, and the mean temperature change for each region calculated.

It is found that the data show large differences in the temperature change between 1901 and 1996 for different geographical and political regions. The extreme ranges (6.17°C between individual 5°x5° boxes, and 1.96°C between regions) are large enough to cast doubt on measurements, such as those from ice cores and tree rings, taken in only a few places, and also on values for mean temperature change from the data considered here, which omit several important regions.

A feature of the results is the large temperature increase in the former Imperial Russia/ Soviet Union (+1.23°C), more than double the change in Western Europe (+0.5°C) or the USA (+0.41°C). This large temperature rise in Russia/Siberia by so many stations that were regarded by Peterson et al (1999) as predominantly “rural”, casts doubt on their assumption that the effects of local heating in rural stations are negligible. Removal of the Russia/Siberia set from their analysis would surely show a significant urbanisation effect from cities in the rest of the world. This widespread local heating around surface measurement stations would explain the differences between the surface temperature record and temperature measurements in the lower troposphere by satellites., and so the major human influence on the climate.

There is a large positive temperature change gradient of about 0.9°C from the North to the South Atlantic and several small regions show a temperature fall.

Karl’s (1998) data suffer from many limitations.. There are only a few continuous records, with notable gaps during the two world wars, and several apparently anomalous results which may indicate inadequacies of measurement. These limitations would appear to derive from the accepted surface measurement datasets of Jones (1994) and Folland and Parker (1995)

INTRODUCTION
According to the IPCC (Intergovernmental Panel on Climate Change), (Houghton et al 1996), the mean surface temperature of the earth’s surface has increased by about 0.3 to 0.6°C since the late 19th century, and by about 0.2 to 0.3°C over the last 40 years, although, recently, Jones (1998) speaks of “the 0.6°C global warming during this century”. Regional variation of this temperature rise has, however, not been entirely clear, despite studies, some of which contained coloured maps, of Hansen and Lebedeff (1987), Jones and Briffa (1992) Parker et al. (1994). Houghton et al (1996), and Jones et al. (1997).

The regions chosen by Karl were rather large, and usually spanned over several geographic and political boundaries. Also, they did not include some oceans. This paper divides the same data into smaller regions, based on better defined geographic and political boundaries, and calculates the mean temperature change for each region in the same manner as that carried out by Karl (1998), in an attempt to throw more light on the details of regional temperature change.

The data are available on the NOAA ftp website
http://www.john-daly.com/guests/ftp.ftp.noaa.gov/temtrn5.dat.

These Russia/Soviet results distort conclusions about global temperature change. For example, Peterson et al (1999) found that global rural temperature trends did not differ significantly from overall global temperature trends. They concluded that this meant that both sets were free from local heating, whereas it actually means that both sets are equally affected by local heating. Most of the Russia/Soviet data would have been classified as “rural”, and their high figures would have counterbalanced a probable lower temperature trend of rural sites as compared with urban sites in other parts of the globe. Omission of the Russia/Soviet data  from the rural sites studied by Peterson et al 1998 would surely show that elsewhere in the world there was a significant “urbanisation” effect in urban sites. The evident local heating around measurement sites, particularly in cities and in cold rural sites,  would explain the differences between the surface temperature record and that of the lower troposphere, as determined by satellites and thus account for the human influence on surface temperatures

The high Russia/Soviet figures  indicate a common trend  of large temperature rises in remote rural sites in severe climates.  Other examples are Canada minus W Yukon (+0.96°C), North Pacific (+0.90°C) Spitzbergen (+4.06°C) and South Georgia (+1.91°C). The main reason would surely be the pressure to improve living conditions in these remote sites, involving better heating in the buildings, provision of roads, and the tendency for vegetation around the sites to be encouraged. The narrowing of  the diurnal temperature range for many of these sites (Easterling et al. 1997) is further evidence for this tendency. An additional possibility for the Russia/Soviet sites is that as many are at, or close to prison camps rations and food in the 1920s might have depended on claims of low temperatures.

Examination of the data shows that almost all of the 1901-1996  temperature rise for Russia/Soviet Union took place in one year, 1987 to 1988. Table 3 gives the details. The average rise for the whole of the region was 1.21°C which contributes 0.16°C to the Northern Hemisphere for that year, and 0.10°C to the Global temperature increase. Since the recorded temperature increase for the Globe is 0.02°C, this means that without the Russian figure, ther would have been a fall of 0.08°C.
TABLE 3  Change in Annual Mean Temperature, °C, between 1997 and 1998 for West Siberia/Russia, for 5°x5° grids, according to Karl (1998) Published in a separate post HERE.