This year we have seen the originator of the Gaia hypothesis, James Lovelock,  realise that the alarmists' position was untenable.


“The problem is we don’t know what the climate is doing. We thought we knew 20 years ago. That led to some alarmist books – mine included – because it looked clear-cut, but it hasn’t happened,” Lovelock said.

“The climate is doing its usual tricks. There’s nothing much really happening yet. We were supposed to be halfway toward a frying world now,” he said.

“The world has not warmed up very much since the millennium. Twelve years is a reasonable time… it (the temperature) has stayed almost constant, whereas it should have been rising -- carbon dioxide is rising, no question about that,” he added. (msnbc link)

He was followed by a former hero of the environment movement, Fritz Varenholt publishing a book "highly critical of the global warming consensus." Fritz examined the "science" after reading Andrew Montford's book, The Hockey Stick Illusion.


For many years, I was an active supporter of the IPCC and its CO2 theory. Recent experience with the UN's climate panel, however, forced me to reassess my position. In February 2010, I was invited as a reviewer for the IPCC report on renewable energy. I realised that the drafting of the report was done in anything but a scientific manner. The report was littered with errors and a member of Greenpeace edited the final version. These developments shocked me. I thought, if such things can happen in this report, then they might happen in other IPCC reports too. 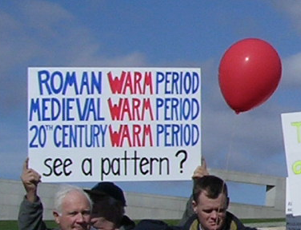 Good practice requires double-checking the facts. After all, geoscientists have checked the pre-industrial climate, over the past 10,000 years: this isolates natural climate drivers. According to the IPCC, natural factors hardly play any role in today's climate so we would expect a rather flat and boring climate history.

Far from it: real, hard data from ice cores, dripstones, tree rings and ocean or lake sediment cores reveal significant temperature changes of more than 1°C, with warm and cold phases alternating in a 1,000-year cycle. These include the Minoan Warm Period 3,000 years ago and the Roman Warm Period 2,000 years ago. During the Medieval Warm Phase around 1,000 years ago, Greenland was colonised and grapes for wine grew in England. The Little Ice Age lasted from the 15th to the 19th century. All these fluctuations occurred before man-made CO2.