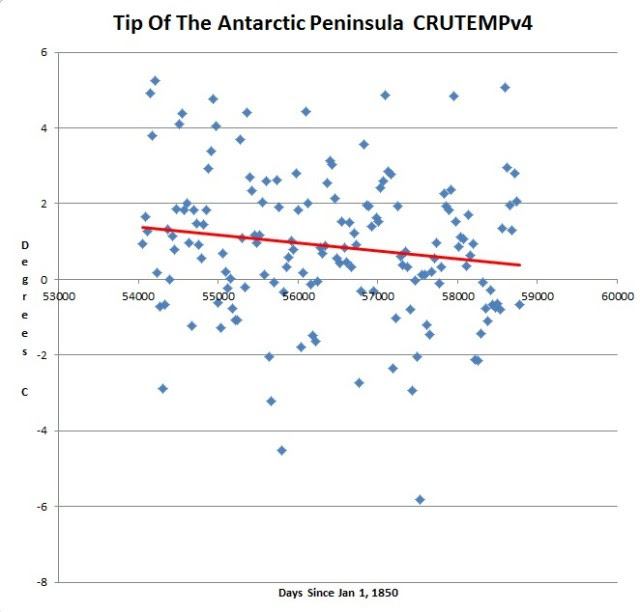 For years we have been told by NASA that the Antarctic Peninsula is the fastest warming place on Earth. But sadly for Al and Jim, over the past decade CRUTEMPv4 shows a decline in temperatures there.
I’m very surprised that NASA didn’t make a press release about this, because all that Hansen cares about is good science.

National Weather Service, Anchorage Forecast Office issued this today:
NOAK48 PAFC 032215 PNSAFC
PUBLIC INFORMATION STATEMENT NATIONAL WEATHER SERVICE ANCHORAGE AK 215 PM AKDT THU MAY 3 2012
…RECORD SEA ICE AT PRIBILOF ISLANDS…
THIS HAS BEEN AN EXTREME WINTER FOR SEA ICE IN THE BERING SEA AND NOW WE HAVE BROKEN THE RECORDS FOR MOST NUMBER OF DAYS WITH ICE AT BOTH SAINT PAUL ISLAND AND SAINT GEORGE ISLAND. 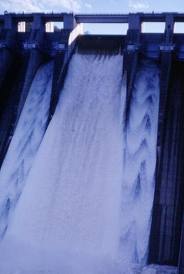 In 2007 Professor Flannery said Sydney, Adelaide and Brisbane were in urgent need of desalination plants.
Four years on, Warragamba Dam is on the verge of overflowing and Brisbane last year endured the worst flooding in almost four decades.
After yesterday discovering Professor Flannery is not a meteorologist, the Weather Channel's meteorologists said it was probably best he left the forecasting to them.

This drought may never break

IT MAY be time to stop describing south-eastern Australia as gripped by drought and instead accept the extreme dry as permanent, one of the nation's most senior weather experts warned yesterday.
"Perhaps we should call it our new climate," said the Bureau of Meteorology's head of climate analysis, David Jones.

Little Ice Age cold interval in West Antarctica: Evidence from borehole temperature at the West Antarctic Ice Sheet (WAIS) Divide
he largest climate anomaly of the last 1000 years in the Northern Hemisphere was the Little Ice Age (LIA) from 1400–1850 C.E., but little is known about the signature of this event in the Southern Hemisphere, especially in Antarctica. We present temperature data from a 300 m borehole at the West Antarctic Ice Sheet (WAIS) Divide. Results show that WAIS Divide was colder than the last 1000-year average from 1300 to 1800 C.E. The temperature in the time period 1400–1800 C.E. was on average 0.52 ± 0.28°C colder than the last 100-year average. This amplitude is about half of that seen at Greenland Summit (GRIP). This result is consistent with the idea that the LIA was a global event, probably caused by a change in solar and volcanic forcing, and was not simply a seesaw-type redistribution of heat between the hemispheres as would be predicted by some ocean-circulation hypotheses. The difference in the magnitude of the LIA between Greenland and West Antarctica suggests that the feedbacks amplifying the radiative forcing may not operate in the same way in both regions.

An unprecedented cold spell that struck Morocco in February and continues to linger well into March has raised serious questions about the country’s national agricultural development programme, which will fail to achieve its desired results if climate change continues to be mismanaged.
The ‘Green Morocco Plan’ was launched last year with the aim of remedying major obstacles that still hinder development of the agricultural sector, tackling everything from ensuring food security for 32 million Moroccans, to meeting the requirements of European markets, the biggest consumers of Moroccan produce.
However, the Plan does not do a thorough job of diagnosing climate factors, citing only drought, which it considers ‘periodical’, as an impediment to successful farming. The report does not address the sudden and unexpected arrival of cold weather, whose damages have been no less than disastrous.

Maine - No warming in over a century

In another blow to the warmist fallacy that man-made CO2 increases hurricanes or extreme weather, a paper published today in the journal Monthly Weather Review finds, "The 2010 eastern North Pacific hurricane season was one of the least active seasons on record. Only seven named storms developed, which is the lowest number observed at least since routine satellite coverage of that basin began in 1966. Furthermore, only three of those storms reached hurricane status, which is also the lowest number of hurricanes ever observed in the satellite era season."

A recent aerial survey of Western Hudson Bay polar bears shows the population has increased slightly to about 1,000 animals, according to the Government of Nunavut.
In 2004, a mark-recapture survey done near Churchill, Man., estimated the Western Hudson Bay population at 935 bears, down from 1194 in 1988. A 2006 study hypothesized that if the climate continued to warm, the polar bear population would decline. 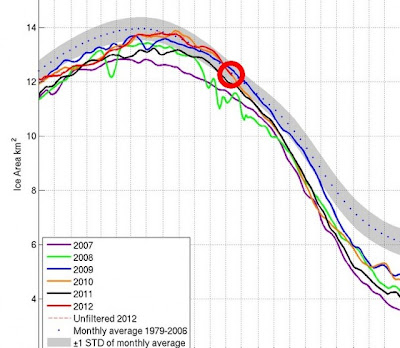