The Religion of Global Warming or is it GAIA 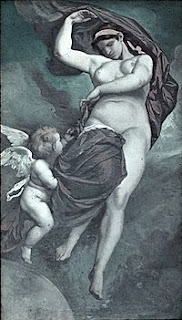 American Thinker has an item by W.A. Beatty titled

It is no coincidence that man-made global warming, or climate change, or whatever it's called this week, got very popular as an issue just as the Soviet Union fell.  It is the top-down centralized government's last best hope of controlling the masses.  And like other forms of socialist totalitarian worldviews, it is a religion as well.

Tim Blair, in his column in the Daily Telegraph once wrote:

A couple of months ago, author and dinosaur-bone specialist Tim Flannery told a Sydney audience that "within this century, the concept of the strong Gaia will actually become physically manifest.
"This planet, this Gaia, will have acquired a brain and a nervous system that will make it act as a living animal, as a living organism."

Beatty adds that "as with most religions, it is susceptible to the earthly temptations of money, power, politics, arrogance, and deceit."

Global warmists have an unshakable faith that man-made carbon emissions will produce a hotter climate, causing natural disasters.  Their insistence that we can be absolutely certain that this will come to pass is based not on science, but on faith.
All the trappings of religion are here:

Beatty then discusses  how rich countries must pay and further US matters including Obama's contribution to the religion.

Global warming is harsh toward skeptics, heretics, and other "deniers."  One of the most dangerous features of the global warming religion is its level of intimidation of the heretics, the non-believers.  For example, former Vice President Al Gore called skeptics "global warming deniers."  Many climatologists have been intimidated into silence, or have had calls to punish them go out.
There is much at stake in getting people to believe in the global warming religion -- so much so that some scientists, using government grants, are fraudulently manipulating climate data and engaging in criminal activity, as revealed in what has been called "Climategate" or "Fakegate."  Disclosure of the Climategate e-mails in November 2009 showed how the global warming clergy was willing to distort evidence and suppress dissenting views in the interest of the faith.

Read more at American Thinker.
Dr. Beatty earned a Ph.D. in quantitative management and statistics from Florida State University.  He was a (very conservative) professor of quantitative management specializing in using statistics to assist/support decision-making.  He has been a consultant to many small businesses and is now retired.  Dr. Beatty is a veteran who served in the U.S. Army for 22 years.  He blogs at rwno.limewebs.com.
Posted by Geoff on April 16, 2012