Posted by Geoff on March 11, 2012
Regular readers will know that TCS blog does not like wind turbines and the subsidies that go to wind power companies, the "polluters" of the countryside. For previous comment see eg here, here, here and here.

Josh (Cartoons by Josh) also has "a 'thing' about wind turbines... grrr."  Here's Josh's latest great contribution to the debate. 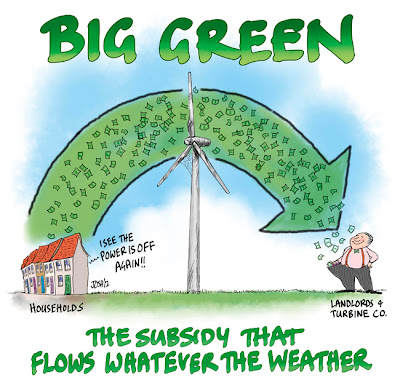 Meanwhile, up in Scotland as reported by scotsman.com:


WIND power – more accurately wind impotence, since turbines operate at just 24 per cent of capacity – is the curse of Scotland. One of the most beautiful landscapes in Europe has been brutally ravaged, families have been driven into fuel poverty, pensioners have been presented with the lethal dilemma “heat or eat” – all to appease the neurotic prejudices of global warming fanatics.

TCS blog reported on the exposure by Professor Gordon Hughes of the crippling cost to consumers HERE.


The inefficiency of wind turbines requires perpetual back-up by building gas turbine power stations – running two parallel energy generation systems, each alternately redundant, in times of economic crisis. The fiscal ratchet is turning relentlessly. The Renewables Obligation, introduced in Scotland in 2002, forces electricity suppliers to source an increasing proportion of power from renewables, currently 11.1 per cent and rising. By 2027 this scam will have cost UK customers £32bn.

Agreeing with Josh, the scotsman points out: "It is not bad news for everybody: across the UK a dozen landowners are sharing £850 million in subsidies for wind turbines."

Wind Power has been killing birds, bats and doesn`t generate power for a large percentage of the time.
The green ideology says wind power is the answer - It's not!
Alice Thompson writing in The Times and re-published by The Australian writes that

"I am a very rich duke, a most agreeable thing to be, even in these days," says Fabrice de Sauveterre in The Pursuit of Love. And it still is. From Keswick to Kensington these are hard times in Britain: mortgages up, fuel up, fares up, heating bills up, child benefit and social security down.

By 2020, the government will be handing over pound stg. 100 million ($149m) a year in rents to landowners simply for the right to put turbines on their turf. Property agents suggest that each large turbine generates about pound stg. 40,000 a year risk-free for the landowner.

The Earl of Moray is reported to rake in nearly pound stg. 2m a year from his wind farm in Perthshire; the Duke of Roxburghe is expected to make pound stg. 1.5m a year from his development in the Lammermuir Hills. The Duke of Gloucester has given West Coast Energy permission for a scheme on his Northamptonshire estate that could generate pound stg. 3m over 25 years. Even the Prime Minister's father-in-law, Sir Reginald Sheffield, is in on it, making pound stg. 1000 a day in rent in Lincolnshire.

It's enough for a peasants' revolt, but all the landowners seem to care about is whether the blades will interfere with their pheasants.