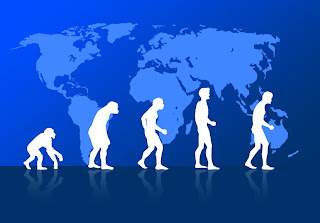 In order to enter Cambridge University I had to have a School Certificate qualification in a classical language. My language was Latin, so I did not learn classical Greek. However, as a result of my PhD studies on the flow birefringence of aluminium soap gels I became a "rheologist", a specialist in the science of flowing liquids (and solids), and I became aware of the rheologists' motto     "Panta Rhei" Πάντα ῥεῖ,  "everything flows" which is attributed to Heraclites but first mentioned by Simplicius. It can also be interpreted as meaning "everything changes" and could be taken as the first expression of the theory of evolution.

Most people accept the truth of this motto, but there have always been some people and even whole groups of people who either deny it or make tremendous efforts to stop change from happening. The political movement dedicated to this purpose is "Conservatism" and this has been extended to the prevention of change as is practically everything else in the idea of "Conservation". The latest twist is SUSTAINABILITY.

Charles Darwin provided a solid scientific basis for explaining the inevitable changes in living organisms as long ago as 1859 yet only 48% of the US population accept it and support is even lower in countries that favour non-Christian religions. Although the world celebrated the 200th anniversary of  Darwin's birth in 2009 many aspects of his theory are rejected or ignored.

The actual claim in his famous book "The Origin of Species" that it provides evidence on how the designation of a "species": is determined, is completely ignored. He made it plain that the term "species" is merely one of the levels in an arbitrary hierarchical system for classifying organisms, and its individual assignment is a matter of pure convenience based on a varying choice of similarities and differences . There is no fixed number of  "species" and the number can be as many as might be decided. "Biodiversity" is as much or as little as professional taxonomists might decide is desirable. It is convenient to classify early humans over slight differences, where pet dogs, which are much more variable, all belong to one species.

A "species" is not, as was once believed by Linnaeus, the most prominent originator of the system, something that is preordained by some sort of deity, but merely a practical card index division. "Speciation", the formation of a new species, is no more mysterious than the point at which taxonomists find it convenient to admit that evolution has progressed to the extent that a previous designation should be changed.

Darwin's theory obviously implies that humans have evolved in exactly the same manner as any other organism so there is no place for a divine creator or for specialist treatment from prayer. This was a very difficult conclusion to accept personally because his wife was an enthusiastic Christian. Admitting that his theory had replaced all religions in writing would have led to rejection of his whole theory by many people. He played it down from the start and only got round to it in his "Descent of Man". This book did not have the benefit of the knowledge of the  many early humans that have now been discovered despite the first of them  (Neandertal) which was discover the Neander Valley (now in Belgium) in  1829, but was not known by Darwin.. Later, in his autobiography, he admitted that he was an agnostic: but this admission was censored by his family and only restored in 1958.

Another respect in which Darwin is ignored is in his pioneer studies is his work on social evolution. His contemporary and close friend Herbert Spencer wrote comprehensive histories on a number of subjects. In his histories of the rise and fall of societies and civilizations of the past he realised that Darwin's theory of evolution applied to groups of people as well as to individuals. The phrase that he used to describe how this evolution works, "survival of the fittest" was eagerly accepted by Darwin as a phrase which characterized his whole theory, and he used it in  "The Descent of Man". This aspect of his theory has been not only widely ignored but even condemned as "Social Darwinism".

It is true that there have been several unfortunate attempts to control human evolution which were so spectacularly unsuccessful as to have given the whole idea a bad name. Darwin and Spencer, admitted that several creatures deliberately killed or marginalized handicapped or genetically undesired individuals and they could only admit that we civilized beings were only held back by our "feelings" that it is wrong. Although they were aware of the evolution of instincts they had not noticed that the tendency to cooperate (altruism) is a human trait which is favoured by evolution, since it benefits a whole society.and therefore has become instinctive for many people. Social instincts also mean that non reproducing members such as spinsters, homosexuals, the handicapped and the elderly can make important contributions to the survival of a society.

Hitler's Germany applied evolutionary theory to justify the elimination of handicapped people, homosexuals, political opponents and  supposed "inferior " races and it caused disaster to the whole world before its harm to his society became evident. Eugenics, a  once much supported movement,  presumed to encourage desirable reproduction without understanding that future desirability cannot be predicted. I am reminded of the story of the Nobel Prizewinner who was asked if he could supply a sample to a sperm bank which assisted the breeding of geniuses. He replied that they had the wrong man, since his son was a mere guitar player. The person they wanted was his father, who was a poor unemployed tailor.

Despite the failures public discouragement of undesirable genetic defects is widely encouraged . Much more common is the encouragement of desired social instincts, so we have honours lists and many "awards" although  the evolutionary value of some may be disputable. We still reward soldiers for their skill in killing others...

Richard Dawkins, our most prominent evolutionist, has failed to recognise the importance of any instinct. He made his name with  "Selfish Gene" which implies that only individual evolution matters, He has even invented a substitute for socially evolved instincts, which he calls a "meme".

One of the main reasons for the decline and disappearance of past human societies has been the resistance to change of the ruling groups. Both the development of human technology and the changes in the world demand that for survival a society must be prepared to change its structure and even its leadership personnel in the face of evolutionary changes. When  the resistance to change is determined enough we may get revolution instead of planned evolutionary change.

The world is currently infected with a pseudo religion which regards all evolutionary change as something for which we humans are alone responsible, that is invariably harmful, must be resisted, and for which we must be prepared to sacrifice some or all of the prosperity or comfort which some of us enjoy. This flies in the face of all evolutionary theory. In order to survive, all organisms and social groups must seek to benefit themselves, and to treat all other species how they  may contribute to this aim.. Organisms have no generalized responsibility for other organisms, except for those that they exploit, which they encourage, and those that exploit them which they discourage.

All organisms interact with one another in a complex manner, described by Ernst Haeckel' by the term "ecology".  This complex interaction cannot be separated up into discrete "ecosystems" thought to be unchanged by evolution, nor is it possible to define ecological regions entirely free from any particular class of organisms, such as humans.

The concepts of "progress" and "development" have been replaced by the concept of "SUSTAINABILITY. There is even "'Sustainable Development" which is a contradiction in terms.

Sustainability can be interpreted in several ways. It may be the idea that any settled way of acting, in manufacture, agriculture or political organisation, should be maintained exactly as it is now, but allowed to change slowly if it does not disturb existing leadership. This might be called "MAINTAINABILITY.  Another meaning  argues that what happens now is the only  acceptable way of doing things and that it must be made to stay the same for ever. Another meaning is that the present is all wrong and we must change it at great sacrifice to ourselves "for the benefit of future generations" by carrying out damaging economic changes  to satisfy a spurious theory that humans are damaging "The Planet". All of  these meanings fly in the face of the science of evolution. One may have some sympathy for people who are harmed by technological change, but the idea that change can be prevented from happening is a recipe for revolution.

Sustainability is now  used so widely by declining Western nations as a guide to future policy that it seems we have already surrendered to our future domination by developing nations which place more emphasis on genuine development and technical, political and organizational change.

"To kill an error is as good a service as, and sometimes better than, the establishing of a new truth or fact."     Charles Darwin
Posted by Geoff on March 28, 2012