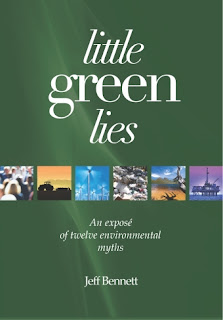 A new publications from Connor Court, the publishers of Ian Plimer's Heaven+Earth and How to get expelled... and Garth Partridge's The Climate Caper.

Little Green Lies by Jeff Bennett -
Jeff Bennett is Professor of Environmental Management in the Crawford School of Economics and Government at the Australian National University. He is a Distinguished Fellow of the Australian Agricultural and Resource Economics Society and a Fellow of the Academy of Social Sciences in Australia. Jeff lectures, researches and consults on the economics of environmental policy issues.

Human induced global climate change is a serious threat to the continued ability of the planet to support humanity and current ecosystems. The damage caused by climate change will be so large that GHG emissions must be reduced now.