When the public learns about huge faults in the skeptic scientist accusation, combined with the faults in the IPCC, the result may send AGW into total collapse. 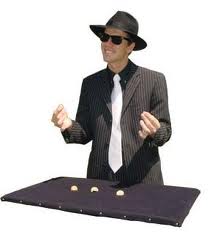 I don’t mean promoters of the issue comically spinning failed predictions for more frequent hurricanes and warmer snow-less winters into covering any hot/cold/wet/dry extremes. Or Al Gore’s Texas-sized carbon footprint undermining demands for ours to to be minuscule. Sure, the IPCC also has appearance problems as a supposedly ‘unbiased’ organization, caught red-handed with assessments authored by people in environmentalist groups, and its own “ClimateGate” scientists behaving badly doesn’t help, either.
We have an arguably more far reaching problem – one that imperils the issue itself, and the mainstream media’s basic integrity.

Russell continues by adding that "This plain-sight problem is invisible.." by anyone accepting the flawed science of the CONsensus.


This monumental problem only becomes evident when we point to skeptic scientists claiming human activity is not a significant part of global warming. The immediate, predictable diatribe is, “Skeptics are few in number, don’t have published papers to their credit, and are on the payroll of big coal & oil.” The problem fades out of sight again when no one challenges those assertions.

Try asking instead, “You can prove any of that?”, and watch what happens.

If the response is that anyone defending skeptic scientists is an ignorant, mind-numbed talk radio listener / right-wing blog reader / Fox News zealot, or is a person who won’t give up their SUV to save the planet, then you see the problem plain as day. This is a sleight-of-hand shell game to ensure the public never thinks there may be legitimate scientific opposition criticism.

A second opinion ought to be welcomed, especially if it’s good news that the little warming we do see is a natural process.

Regular Readers of this blog will be aware that we are critical of the Main Stream Media (MSM) and how they have forsaken journalistic scepticism for climate alarmism advocacy. Russell points to Al Gore's discredited Movie - "An Inconvenient Truth" and his following book as an example of how the MSM have failed in their duty of even-handed reporting.


Identical words from the same memos in Gore’s Senate office as much as four years prior to Gelbspan, the man he credits with discovering them – a huge red flag if there ever was one. And not a word about this contradiction in the mainstream media. Had reporters taken just a few hours of their time to talk to a now-former employee of that coal organization – as I did just recently – they would have been told that these specific memos were a rejected proposal for the PR campaign, and were never actually implemented, thus they would not have been seen by other fossil fuel company executives. There was no industry directive to “reposition global warming”, period.

Legitimate scientific criticism could wipe out the so-called global warming crisis. What’s been the response for twenty years? Don’t debate skeptic scientists, assassinate their character – but hide the evidence proving their corruption.

The monumental fault in global warming is right there in plain sight, and the mainstream media either can’t spot it or offers strangely vague answers when I try to alert them about it. This issue showcases a genuine divide of inexcusable proportions: We have 1% of the media elite who have committed journalistic malfeasance for over twenty years, and we are the 99% who no longer trust them! Expose this problem for all to see, and we knock down not only the politics of global warming, we also potentially put news reporting back to the way it should be done, telling the truth, the whole truth, and nothing but the truth.

Russell Cook’s collection of writings on this issue can be seen at “The ’96-to-present smear of skeptic scientists,” and you can follow him on Twitter at QuestionAGW