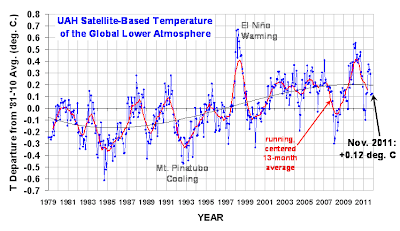 The end of November 2011 completes 33 years of satellite-based global temperature data, according to John Christy, a professor of atmospheric science and director of the Earth System Science Center (ESSC) at The University of Alabama in Huntsville. Globally averaged, Earth’s atmosphere has warmed about 0.45 Celsius (about 0.82° F) during the almost one-third of a century that sensors aboard NOAA and NASA satellites have measured the temperature of oxygen molecules in the air.
This is at the lower end of computer model projections of how much the atmosphere should have warmed due to the effects of extra greenhouse gases since the first Microwave Sounding Unit (MSU) went into service in Earth orbit in late November 1978, according to satellite data processed and archived at UAHuntsville’s ESSC.
“While 0.45 degrees C of warming is noticeable in climate terms, it isn’t obvious that it represents an impending disaster,” said Christy. “The climate models produce some aspects of the weather reasonably well, but they have yet to demonstrate an ability to confidently predict climate change in upper air temperatures.”

That release caused a barrage from the AGW Alarmists. John Christy and Roy Spencer responded:


John
Earlier this week we reported on the latest monthly global temperature update, as we do every month, which is distributed to dozens of news outlets. With 33 years of satellite data now in the hopper (essentially a third of a century) we decided to comment on the long-term character, noting that the overall temperature trend of the bulk troposphere is less than that of the IPCC AR4 climate model projections for the same period. This has been noted in several publications, and to us is not a new or unusual statement.
Suggesting that the actual climate is at odds with model projections does not sit well with those who desire that climate model output be granted high credibility.

I was alerted to this (Washington Post) blog post within which are, what I can only call, “myths” about the UAH lower tropospheric dataset and model simulations. I’m unfamiliar with the author (Andrew Freedman) but the piece was clearly designed to present a series of assertions about the UAH data and model evaluation, to which we were not asked to respond. Without such a knowledgeable response from the expert creators of the UAH dataset, the mythology of the post may be preserved.

The first issue I want to address deals the relationship between temperature trends of observations versus model output. I often see such posts refer to an old CCSP document (2006) which, as I’ve reported in congressional testimony, was not very accurate to begin with, but which has been superseded and contradicted by several more recent publications.
These publications specifically document the fact that bulk atmospheric temperatures in the climate system are warming at only 1/2 to 1/4 the rate of the IPCC AR4 model trends. Indeed actual upper air temperatures are warming the same or less than the observed surface temperatures (most obvious in the tropics) which is in clear and significant contradiction to model projections, which suggest warming should be amplified with altitude.

The blog post even indicates one of its quoted scientists, Ben Santer, agrees that the upper air is warming less than the surface – a result with which no model agrees. So, the model vs. observational issue was not presented accurately in the post. This has been addressed in the peer reviewed literature by us and others (Christy et al. 2007, 2010, 2011, McKitrick et al. 2010, Klotzbach et al. 2009, 2010.)

Then, some people find comfort in simply denigrating the uncooperative UAH data (about which there have been many validation studies.) We were the first to develop a microwave-based global temperature product. We have sought to produce the most accurate representation of the real world possible with these data – there is no premium in generating problematic data. When problems with various instruments or processes are discovered, we characterize, fix and publish the information. That adjustments are required through time is obvious as no one can predict when an instrument might run into problems, and the development of such a dataset from satellites was uncharted territory before we developed the first methods.

The Freedman blog post is completely wrong when it states that “when the problems are fixed, the trend always goes up.” Indeed, there have been a number of corrections that adjusted for spurious warming, leading to a reduction in the warming trend. That the scientists quoted in the post didn’t mention this says something about their bias.


People who claim (like Roy Spencer did) that it is “impossible” to separate human from natural influences on climate are seriously misinformed,” he wrote via email. “They are ignoring several decades of relevant research and literature. They are embracing ignorance.” “Many dozens of scientific studies have identified a human “fingerprint” in observations of surface and lower tropospheric temperature change,” Santer stated.

In my opinion, the supposed “fingerprint” evidence of human-caused warming continues to be one of the great pseudo-scientific frauds of the global warming debate. There is no way to distinguish warming caused by increasing carbon dioxide from warming caused by a more humid atmosphere responding to (say) naturally warming oceans responding to a slight decrease in maritime cloud cover (see, for example, “Oceanic Influences on Recent continental Warming“).