From the UN News Centre:

More than two million lives can be saved each year by implementing the cost-effective measures presented in a United Nations report released today, which would help reduce black carbon, methane and ozone emissions.

The report, issued by the UN Environment Programme (UNEP), provides a package of 16 measures that could not only save some 2.5 million lives each year but also avoid crop losses amounting to 32 million tons annually, and help keep the global temperature rise below the two degree Celsius target over the next 40 years.

The measures target emissions of black carbon, methane and ground-level ozone, also known as short-lived climate forcers (SLCFs), and their implementation would allow countries to save rather than spend resources and money. This is in part because a lot of measures allow for gases to be harvested as a source of clean fuel.

Black carbon, methane and ground-level ozone....not a mention of CO2. Has CO2 finally been declared innocent by the UN?
Posted by Geoff on November 26, 2011 No comments: 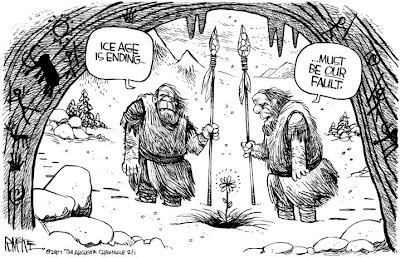 DRAMATIC forecasts of global warming resulting from a doubling of atmospheric carbon dioxide have been exaggerated, according to a peer-reviewed study by a team of international researchers. In the study, published today in the leading journal Science, the researchers found that while rising levels of CO2 would cause climate change, the most severe predictions - some of which were adopted by the UN's peak climate body in its seminal 2007 report - had been significantly overstated.
The authors used a novel approach based on modelling the effects of reduced CO2 levels on climate, which they compared with proxy-records of conditions during the last glaciation, to infer the effects of doubling CO2 levels.
They concluded that current worst-case scenarios for global warming were exaggerated.
"Now these very large changes (predicted for the coming decades) can be ruled out, and we have some room to breathe and time to figure out solutions to the problem," the study's lead author, Andreas Schmittner, an associate professor at Oregon State University, said.

The study found high-sensitivity models led to a "runaway effect" under which the Earth would have been covered in ice during the last glacial maximum, about 20,000 years ago, when CO2 levels were much lower.
"Clearly that didn't happen, and that's why we are pretty confident that these high climate sensitivities can be ruled out," he said.

Also reported by the UK Mail on Line:


Apocalyptic predictions about climate change are likely to be wrong, a study says.
Dire forecasts by activists who say that carbon dioxide levels will 'double' and cause temperature rises of 10C are 'unlikely'.
Instead, the maximum increase is likely to be 2.6C.

The ice age, 21,000 years ago, provided a 'clean' comparison where human activities had no effect on atmospheric levels of CO2.
The period was not as cold as previously believed.

Dr Schmittner told the Daily Mail that it would be ‘virtually impossible’ for a doubling of carbon dioxide to cause temperatures to rise by 8ºc or 10ºc.


"When you reconstruct sea and land surface temperatures from the peak of the last ice age 21,000 years ago -- which is referred to as the Last Glacial Maximum -- and compare it with climate model simulations of that period, you get a much different picture," said lead author Andreas Schmittner, an Oregon State University researcher.
"If these paleoclimatic constraints apply to the future, as predicted by our model, the results imply less probability of extreme climatic change than previously thought."

The pdf can be downloaded from Andreas Schmittner's site here:

His blog is here:


Thanks to Mike D.