A report from Reuters today says

Dutch fall out of love with windmills

(Reuters) - When the Netherlands built its first sea-based wind turbines in 2006, they were seen as symbols of a greener future.

But five years later the green future looks a long way off. Faced with the need to cut its budget deficit, the Dutch government says offshore wind power is too expensive and that it cannot afford to subsidize the entire cost of 18 cents per kilowatt hour -- some 4.5 billion euros last year.

Meanwhile in the UK, if he ever was in love with Wind Farms, it is reported that the Duke of Edinburgh has made a fierce attack on wind farms, describing them as “absolutely useless”. 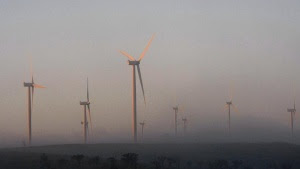 In a withering assault on the onshore wind turbine industry, the Duke said the farms were “a disgrace”.

He also criticised the industry’s reliance on subsidies from electricity customers, claimed wind farms would “never work” and accused people who support them of believing in a “fairy tale”.

When Esbjorn Wilmar, of Infinergy, which builds and operates turbines, introduced himself to the Duke at a reception in London, he found himself on the end of an outspoken attack on his industry.

“He said they were absolutely useless, completely reliant on subsidies and an absolute disgrace,” said Mr Wilmar. “I was surprised by his very frank views.”

See also: All you wanted to know about Wind Turbines...