ARRHENIUS DID WATER VAPOUR, NOT CO2
The Greenhouse Effect, based on carbon dioxide is claimed to have been first established by the Swedish chemist Svante Arrhenius in his paper


Arrhenius S 1896, On the Influence of Carbonic Acid in the Air upon the Temperature of the Ground, London, Edinburgh, and Dublin Philosophical Magazine and Journal of Science (fifth series), April 1896. vol 41, pages 237–275.

I have examined this paper in detail, as part of my paper "The Greenhouse and its Effects" at
http://nzclimatescience.net/images/PDFs/the%20greenhousexxx.pdf   which said:


"Arrhenius made no measurements of infra red absorption himself, but was entirely dependent on the measurements of Samuel Pierpont Langley and his assistant Frank Very."

Langley made a series of measurements of the full moon’s radiation with his instrument called the "Bolometer" at the Alleghany Observatory in 1997. He made measurements at different angles with the moon.

Arrhenius had the idea that by finding out the difference he got from different angles he could calculate the absorption of the moon’s radiation by the earth’s atmosphere. By assuming that the radiation from the moon was approximately the same as that of the earth he could calculate the absorption of the earth’s atmosphere by the trace absorbent gases water vapour and carbon dioxide.

Erren  H 2011, "Langley Revisited". http://members.casema.nl/errenwijlens/co2/langleyrevdraft2.htm
has shown that Langley’s measurements used by Arrhenius were preliminary and had serious errors. They became less accurate as they approached the region used by Arrhenius, the measurements were exaggerated, and did not reach far enough to include the major absorption frequency of carbon dioxide. He concludes from his study that Langley’s observations were of little use in studying the influence of carbon dioxide on the climate".

(The correctness of Erren's argument can be shown by this passage from Arrhenius' paper:


"For angles greater than 38 degrees (>9.5m) we possess no direct observations of emission or absorption of the two gases"

This means that the figures do not contain the main CO2 absorption band  at 14.99 microns. but only the two minor ones at 2.7 and 4.3 microns.

Langley’s figure for the temperature of the moon was 45ºC. Today’s figure is an average of 107ºC for the day temperature, the one Langley measured. This huge discrepancy means that Langley’s figures must be treated as completely unreliable, and so are the results calculated from them by Arrhenius.

So, about 98% of Arrhenius’ figures and calculations, even if soundly based, apply to water vapour and not to carbon dioxide."

I think, on reflection, that my estimate of 98% water vapour was an overestimate.

It is amazing what an edifice has been built up on this hopelessly incorrect paper.

"To kill an error is as good a service as, and sometimes better than, the  establishing of a new truth or fact"         Charles Darwin
Posted by Geoff on November 16, 2011 No comments:

Barack spreads his warmth around Australia

While POTUS Obama is in Australia, spreading warmth, what is happening back  in the US? 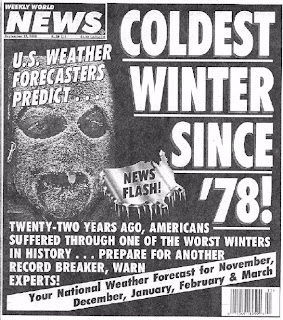 Russia says No; Midnight in Moscow for Kyoto 2. 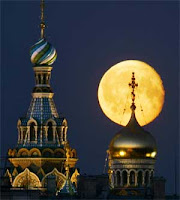 This blog previously reported "Death at Durban. Kyoto Killed." The Moscow Times reports that Russia will not sign a new Kyoto agreement.


Russia's chief climate negotiator said the country will "never" sign up to extend the Kyoto Protocol for a second implementation period, casting further doubt on chances of a deal at the international climate conference in South Africa at the end of this month.
"We will never sign Kyoto 2 because it would not cover every country," Oleg Shamanov, director of  international cooperation on the environment at the Foreign Ministry, said late last week.

Refusal by Russia, Japan and Canada to renew Kyoto for a second period dashed hopes of an agreement at the Cancun climate talks last year.

Looks like Death at Durban could be an accurate warning to the alarmists. Reuters reports that a new a broader climate deal is out of reach for now.


The view is recognition that agreement on a pact that commits all major greenhouse gas polluters to curbing the growth in planet-warming emissions is slipping further away, in part because of sluggish economic growth and a mounting debt crisis.
Negotiators from nearly 200 nations meet from Nov 28 to Dec 9 in Durban, South Africa, for an annual summit on climate change. Previous talks have failed to secure a successor to Kyoto -- the main global accord on tackling climate change.

As reported by the Global Warming Policy Foundation (from the Times of India) The European Union is also backing away  from a new Kyoto agreement.


EU insists that it will sign on to Kyoto II only if emerging economies agreed to binding targets by 2015 and start talks for it right away - a substantial shift from its position a year ago. But its attempt to formulate a 'coalition of the willing' seems doomed.
Consensus eluded a meeting of key countries on climate change, including India, EU, China and the US, called by Spain along with South Africa and Mexico at Madrid recently.
The meeting called days before the official UN climate talks start in Durban ended without agreement between countries on the need to kick-start negotiations on a new climate compact in Durban which puts binding commitments on emerging economies as well.

Also recommended to readers today is Steve Goddard of Real Science and his post discussing the adjusting of temperatures:

Posted on November 13, 2011 by Steven Goddard
As of 1999, temperatures were going the wrong direction for 70 years, and something had to be done about it.
Posted by Geoff on November 16, 2011 No comments: