Kobashi et al 2011 was just published in GRL, and it looks like it will be upsetting the paleoclimate apple cart. The conclusions of Kaufman et al 2009 look to be minimized in comparison to this much more complete study.

The European Union’s Envisat satellite was launched in 2002. Sea level in the northern hemisphere has declined since they started measuring it, and is now almost 30 mm lower than it was in the middle of 2004. 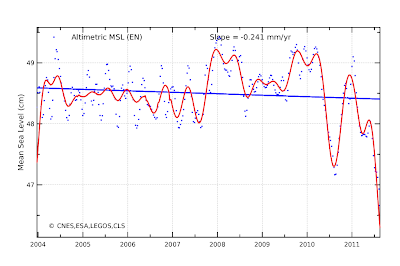 And on US Hurricanes:

Third Quietest Hurricane Period On Record In The US
http://www.aoml.noaa.gov/

War. Over the last six years, there have been officially five hurricane strikes in the US, the third quietest period on record. Six out of the seven quietest periods have been since 1975 – Tamino’s period of modern global warming.


The LSM is calling this one of the most active hurricane seasons on record, because they are completely incapable of thinking for themselves or doing any independent research.