How Natural is the Recent Centennial Warming?

How Natural is the Recent Centennial Warming? An Analysis of 2249 Surface Temperature Records 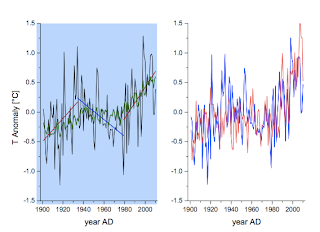 
Abstract.
We evaluate to what extent the temperature rise in the past 100 years was a trend or a natural fluctuation and analyze 2249 world- wide monthly temperature records from GISS (NASA) with the 100-year period covering 1906-2005 and the two 50-year periods from 1906 to 1955 and 1956 to 2005. No global records are applied. The data document a strong urban heat island effect (UHI) and a warming with increasing station elevation. For the period 1906-2005, we evaluate a global warm- ing of 0.58 0C as the mean for all records. This decreases to 0.41 0C if restricted to stations with a population of less than 1000 and below 800 meter above sea level. About a quarter of all the records for the 100-year period show a fall in temperatures.


As a result, the probabilities that the observed temperature series are natural have values roughly between 40% and 90%, depending on the sta- tions characteristics and the periods considered. ’Natural’ means that we do not have within a defined confidence interval a definitely positive anthropogenic contribution and, therefore, only a marginal anthropogenic contribution can not be excluded.

In this paper, we have used 2249 unadjusted monthly temperature records of 100 and 50 years in length and evaluated the temperature changes for the periods 1906-2005, 1906-1955, and 1956-2005. Our analysis was based exclusively on local records and applied DFA, Monte Carlo methods and synthetic records. The main results and conclusions are the following.

c) By separating stations into specific station groups, such as those with a defined minimum population, a strong UHI and elevation warming can be identified.
d) The vast majority of temperature stations are found on land and in the northern hemisphere, and have Hurst exponent of α ≈ 0.63 in such loca- tions. However, two thirds of the Earth are covered with water, and the relatively few stations on islands or near oceans have higher Hurst exponent of α ≈ 0.7. Therefore, a real exponent for the entire Earth could be some- what higher than α ≈ 0.63. Records with higher exponents embody even higher probabilities for natural fluctuations.
Posted by Geoff on November 04, 2011 No comments:

In  a HuffPo article, Tom Zeller Jr examines some of the claims and counter claims re the skepticism of 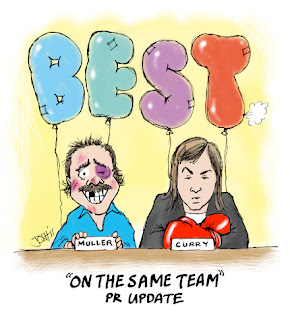 
After Muller's two-year-old Berkeley Earth Surface Temperature (BEST) project began publishing its findings on these and other questions late last month, numerous news outlets have portrayed him as a former skeptic whose research has led him back to the global warming fold.
Those portrayals then generated a subsequent wave of opprobrium from the small but vocal community of skeptics and deniers who think, across the broadest spectrum, that global warming is nonsense, that humans aren't contributing to it, or some mixture of both. Efforts to disown him as part of Team Skeptic ensued.
"Richard Muller is not who he says he is. He is an advocate of the theory of man-made global warming," wrote a columnist in The Charleston Daily Mail. "The skeptic who claims to have debunked climate skepticism never was a skeptic," declared the folks at JunkScience.com.
Muller suggested the bluster on all sides was somewhat misplaced.
"It is ironic if some people treat me as a traitor, since I was never a skeptic -- only a scientific skeptic," he said in a recent email exchange with The Huffington Post. 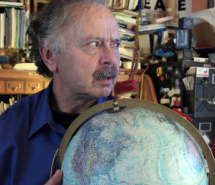 "I certainly feel that there is lots of room for skepticism on the human component of warming," Muller said.

The Charles Koch Foundation, a philanthropy  that provided $150,000 in funding for the BEST team's work, issued  a statement:


“The Charles Koch Foundation has long supported, and will continue to support, sound, nonpartisan scientific research intended to benefit society by informing public policy and advancing an understanding of the costs and benefits of proposed solutions. Among the research the foundation recently supported is a project by Professor Richard A. Muller in partnership with the Lawrence Berkeley National Laboratory and several other foundations. That research is undergoing peer review now but has already received significant media interest. The research examined recent global surface temperature trends. It did not examine ocean temperature data or the cause of warming on our climate, as some have claimed,” said Tonya Mullins, director of communications for the foundation.