Alternative Energy - Something to think about.... 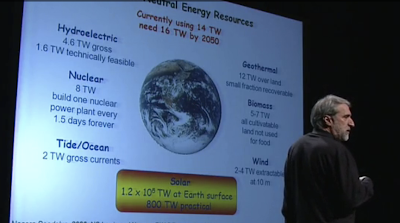 Some thoughts on alternate energy - click on link below
Alternative Energy Dan Nocera: The Future is "Really not that Bad"


Globally, we currently use 14 terawatts (a trillion watts) of energy each year; we’ll need 16 TW/year by 2050. (You can read more about how Nocera reached this statistic in this article in Reason Magazine.) “Close your eyes and think about 42 years from now… think about a kid, right now, that you like: this is going to be their future. It’s going to be a bad future if you look at these numbers.” If we converted the entire crop basis of the world to fuel and burned it, we’d reach a figure of 5-7TW. Photosynthesis has a limit.

If we take all the wind that’s 10 meters above the ground, we’d find that 2-4 TW are extractable. In terms of nuclear power, we can generate 8 TW; we’d have to build 200 nuclear power plants each year to reach our needs. That’s one new plant every 1.5 days, and bear in mind that we’d have to decommission them almost as fast as we can build them.

Right now we use 14 TW; why do we need 16? “The first assumption I made is that you will do all the right things, and save 100% of the energy you’re using today. We’ll still need 16 TW. If you want to be dummies, and not [do the right thing], then we’ll need 40 TW.” The picture as he initially paints it looks pretty dire.

Three billion people don’t have energy; 3 million people haven’t been born yet. “The solution to the energy challenge thus in my opinion rests in providing the non-legacy world a carbon-neutral, sustainable energy policy.” What he wants to do, he says, is go after “people without stuff” — not doing what the Department of Energy tends to do, which is taking big systems and trying to make them tinier, which is costly. You have to start from the bottom and work up. “If you don’t, I guarantee [change] will always be too costly,” he predicts.

We could always try to keep 300 million people from being born — educating women in rural areas (about birth control etc) is one way to make a big impact on energy. But that’s not going to be enough. “Even if you got the cheapest solar panels in the world, you’re doomed; you guys don’t like living [without power] after the sun goes down.” So we need to be able to store energy.

“Don’t let anybody tell you batteries are going to get better. They can’t, it’s physically impossible.” Batteries are made of electrons on metal with oxygen in between; without a way to compress matter and make it more dense, battery store can’t improve, ever. What people can speak to is “power density” — but on the whole, batteries are “lousy, lousy, lousy, lousy.” We use fuels because they have lots of energy. We could use other energy sources, but when push comes to shove, we get a lot of energy out of fuels, because we can put electrons in tiny volumes of space.

He shows us a graph depicting the manufacturing of a Boeing 777, an etching tool, a machine tool, an automobile, a burger: he’s plotted pounds and dollars and annual volume of each of these items. “If I can put a Boeing 777 and a McDonald’s hamburger on the same curve, there’s something wrong here.” How do we think about energy? We build one thing, and it weighs a lot — that’s at one end of the curve. But if you want to generate energy for the whole world, you need near-infinite production, and you’d better make it light. “That’s exactly how we don’t do energy.” But it’s how he thinks we should.

“How does a leaf work?” Photosynthesis: it stores a tremendous amount of energy but then the plant has to use it. How is photosynthesis not great? Most living things use most of their energy to live, not to give us oil wells. A plant takes in light plus water and CO2 and makes O2. It makes solid hydrogen, which it fixes with CO2. A plant takes low-energy bonds in water, using sunlight to rearrange the bonds to make oxygen and hydrogen. The energy is stored in high-energy bonds.

What plants offer us is insight into how we might create workable liquid fuel. The MIT swimming pool contains 3.2 million liters of water; that pool could store 43 TW of energy, if we take the water down to hydrogen and oxygen. That’s assuming 100% efficiency in the water conversion process, but even if we assume 50% efficiency, we could generate the world’s energy needs with 2/3 of that pool. “The bottom line is, I’m talking about solving the energy problem with an Olympic-sized pool of water. We could be doing that globally, per second. That’s the hope, because there’s so much energy density in that fuel.”

“Make it light, and enable high throughput manufacturing,” he says. If we split water to make fuel, we can “make something cheap and highly manufacturable.” His group has figured out how to do artificial photosynthesis. They made a thing (he won’t tell us exactly what it is) which self-assembles, which takes sunlight from a photovoltaic and splits water into hydrogen and oxygen. It’s self-healing; if it breaks down, it can fix itself. And it doesn’t require pure water in order to work. “Not only can you take water and store energy; if we had human waste water, we can split that into hydrogen and oxygen, and recombine them and make clean drinking water.”

You can buy a single solar fuels storage unit for $50,000; a Co-OEC Electrolyzer can be mass-produced for ~$100. The home, he says, will become a power station and gas station. “Take cheap PV, go to this all-plastic electrolyzer; storing hydrogen and oxygen in the home are not hard; and then you need a fuel cell.” You use the hydrogen and the fuel cell to make a liquid fuel.

He shows us an image of himself from National Geographic, holding in his hands the amount of water he’d need to split in a day to fuel a big expensive home — it looks like less than 10 gallons. (You can see that photo here at National Geographic — it’s the fourth from the last photo in that photo series.)