The currently accepted Global Radiation Budget of Trenberth, Fasulla and Kiehl is as follows: 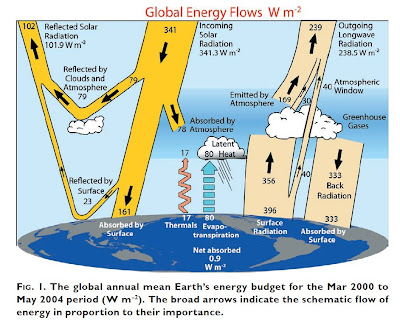 The diagram is confusing, because by taking from the earth's radiation of 396W/msq the amount of 40W/msq claimed to penetrate the "Atmospheric Window" it gives the impression that the rest, the 356W/msq is absorbed by greenhouse gases when this is wrong. It ought to separate that part of the "back radiation" which is attributed to absorption form greenhouse gases from that which arises from other forms of heating of the atmosphere. There is no mention of "back radiation" from clouds.

Although the authors admit to many uncertainties in these figures, no estimates are given of their size, and much anguish ( for example, by Trenberth and Hansen) has been expressed at their net positive figure of 9W/sqm which suggests that the earth is steadily warming without additional greenhouse gases. This amount is way below the likely accumulated inaccuracies.

There are many who have worried that "back radiation" has such a large  role in warming the earth. Some have been tempted to deny the validity of such established laws of physics as the Stefan/Boltzmann and Planck radiation equations, and even try to argue that the Second  Law of Thermodynamics forbids the very existence of
"back radiation" despite the fact that the system is not thermally isolated and is never in equilibrium.

Some seem to have realised that there are aspects of this model that lack plausibility, but few are prepared to argue that it is basically incorrect.

The basic error is in the "Greenhouse" concept. A greenhouse is a piece of equipment whose primary task is to protect its contents from the outside climate.

The fundamental properties of this climate are the accumulated knowledge built up by meteorologists over 200 years, which are presented to us daily with weather forecasts. We should realise that this accumulated research has shown that the factors influencing  the earth's climate are:
Some of these influences are currently unpredictable and the rest are bedeviled by ignorance of the factors influencing the behaviour of fluids. This "Chaos" means that future forecasting is limited, but is still a vital part of all our lives.

The "Greenhouse" model abolishes most of this information, which is the substance of traditional meteorology, apart from. the residual existence of "Thermals" and "Latent Heat" so they can claim to have abolished "chaos" to the extent of "projecting" climate for 100 years or more. In the process they have downplayed important heat transfer mechanisms  from the climate with the exception of radiation, which now dominates and can be used to claim that absorption of heat by the minor greenhouse gases is entirely responsible for the behaviour of the climate.

The "Greenhouse" model  above assumes- 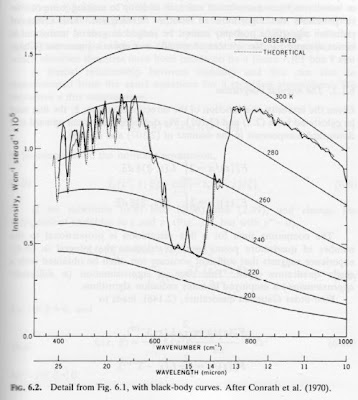 All of these assumptions are absurd, and it is not surprising that they have completely failed both to simulate past climate, or to forecast future climate..

By day, when the sun shines, the earth is heated. The atmosphere is then heated by conduction and the heated air rises. The heat is distributed by turbulence in the form of a complex system of cyclones, anticyclones, Hadley cells, hurricanes and tornados. The heat travels slowly to the top of the atmosphere, lowering its temperature by mixing with cooler air the higher it gets.

Each layer emits radiation, both up and down ("back radiation"). Because its energy is dependent on the fourth power of the absolute temperature, most of the "back radiation" comes from the lower layers. .

Also, by day, the heated earth evaporates water, from the soil, from the ocean, from lakes. The water vapour joins the mixing process and when it reaches the upper, cooler regions of the atmosphere, it condenses back to liquid water or snow in the form of clouds. These clouds restore its latent heat, so they raise the local temperature and the upwards and downwards emission.  They also provide additional "back radiation". Wind changes can restore clouds to warmer regions where they provide precipitation as rain or show which cools the earth below.

The heated earth radiates and some of this radiation may be absorbed by greenhouse gases, particularly water vapour. This adds to the "back radiation". This is a graph of the longwave radiation at the Top of the Atmosphere.


Absorption by "greenhouse gases exists, as is shown by the spectrum at the top of the atmosphere, but the presence of other methods of heat transfer to the atmosphere have been downplayed or ignored.

The situation is immensely variable with time of day,  latitude, the local topography, the seasons and the extent of absorption of all radiation by clouds or aerosols.At any one time the energy is striving towards a different equilibrium situation it can never reach.

By night, several factors are different, because of the absence of the sun for an extended period, yet no separate Top of the Atmosphere spectra has been published . The earth cools by radiation, but less so by convection, which slowly ceases. Previously warmed air can then warm a cooled surface so the convection is reversed.. Previously damp air can deposit in the ocean, or dew and frost on land. "Back radiation" from clouds also warms as Roy Spencer recently found.

"Back Radiation" should be seen as the result of approximately half of  the heat transferred to the atmosphere by convection and absorption being returned back to where it came from.

To kill an error is as good a service as, and sometimes better than, the establishing of a new truth or fact"