CATHOLIC Archbishop of Sydney George Pell  in an address to the Global Warming Policy Foundation (GWPF) began by thanking the GWPF for the invitation AND "the existence of the Foundation and its sane and important contributions in this debate."

In the Book of Genesis we read that God “regretted having made human-beings”, such was their wickedness and anarchy and decided to send an immense flood “to destroy them and the earth”.
However God chose Noah “an upright man” to build an ark and enter it with his wife and family and two animals of every kind. The ark survived the flood and Noah was commanded “to breed, multiply and fill the earth”, reassured by God’s promise that “never again shall all living things be destroyed by the waters of a flood”.

On the deceptive use of the term "carbon," Cardinal Pell says:


Another more spectacular example of this successful spin is the debate on “carbon footprints”, on the advisability or not of a “carbon tax”. We all know that it is the role of carbon dioxide in climate change which is in question, not the role of carbon, but we continue to talk about carbon. The public discussion is almost entirely conducted in terms of “carbon footprints” and a “carbon tax”, provoking colourful but misconceived images of carcinogenic burnt toast and narrow, Dickensian chimneys being cleaned by unhealthy young chimney sweeps. It is brilliant advertising. But it is untrue.

On carbon dioxide levels in the atmosphere:


I have discovered that very few people know how small the percentage of carbon dioxide is in the atmosphere.
Carbon dioxide levels in the atmosphere during the twentieth century are estimated to have risen from 280ppmv to about 390ppmv today, an increase of forty per cent. Yet today’s total CO2 concentration represents less than one-twenty-fifth of one per cent.
While opinions vary, one geochemist has calculated that only about five per cent of present atmospheric carbon dioxide is derived from burning fossil-fuels; that is, just 19 parts of CO2 per million parts of atmosphere.

CO2 does not destroy the purity of the atmosphere, or make it foul or filthy (the Oxford Dictionary definition of a pollutant). It is not a pollutant, but part of the stuff of life.


A final point to be noted in this struggle to convince public opinion is that the language used by AGW proponents veers towards that of primitive religious controversy. Believers are contrasted with deniers, doubters and sceptics, although I must confess no one has dubbed me a climate change heretic.
The rewards for proper environmental behaviour are uncertain, unlike the grim scenarios for the future as a result of human irresponsibility which have a dash of the apocalyptic about them, even of the horsemen of the Apocalypse. The immense financial costs true-believers would impose
on economies can be compared with the sacrifices offered traditionally in religion, and the sale of carbon credits with the pre-Reformation practice
of selling indulgences. Some of those campaigning to save the planet are not merely zealous but zealots. To the religionless and spiritually rootless, mythology — whether comforting or discomforting — can be magnetically, even pathologically, attractive.

Where we are in God's great pal for the planet:


In broad outline the history is uncontroversial. For 2.5 million years, northern Eurasia and North America were covered by ice sheets kilometres deep, and the earth has seen eleven strong glacial episodes (or Ice Ages) in the past million years. We live in an interglacial period which has now lasted 10,000-11,500 years.

The warmer interglacials usually last between 10,000 to 20,000 years, occurring at intervals of about 100,000 years. By these criteria one could argue that an Ice Age is now overdue, which perhaps contributed to the cooling scare in the 1970s.

Controversies commence as we approach the Christian era as nobody seems too concerned about the Minoan warming of about 3,500 years ago. The Roman warming around 2,000 years ago provokes some heart burn, while we have seen attempts to erase the Medieval Warm period (850–1300AD) from history.

So where does that leave the Alarmists?


The debates about anthropogenic global warming can only be conducted by the accurate recognition and interpretation of scientific evidence. The evidence of historians is also vital because this is not simply a mathematical problem, not “pure” science.
Extreme-weather events are to be expected, but are unexpected in every period. No one towards the end of the Medieval Warming in Europe expected the rapid descent into the cold and wet of the Little Ice Age, for example, or the freezing gales, winds and heavy rains, that produced the short summers and the terrible developing famines of 1315–20. Surprises such as these will continue into the future.

For this reason (among others) I support the recommendation of Bjorn Lomborg and Bob Carter that, rather than spending money on meeting the Kyoto Protocol which would have produced an indiscernible effect on temperature rise, money should be used to raise living standards and reduce vulnerability to catastrophes and climate change (in whatever direction), so helping people to cope better with future challenges. We need to be able to afford to provide the Noahs of the future with the best arks science and technology can provide.

For the whole address, click on the link in the title above.
See also Resisting the GREEN DRAGON: 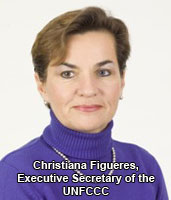 "One of the big sticking points at the climate summit in Cancun is how best to distribute the $30 billion promised under the Copenhagen Accord. The money, known as Fast Start Finance, is designed to help poor countries reduce their own carbon emissions and protect themselves against climate impact for the next two years. Today Australia announced further allocations under the $599 million of Australia's committed Fast Start Financing." See also "You're so wrong, Greg Combet."

Now it appears that the Green Climate Fund has doubt surrounding it.

Wealthy countries have vowed to deliver $100 billion annually by 2020 for poor and vulnerable nations to adapt to climate impacts and develop low-carbon economies. Countries have been in the process of establishing the architecture of a Green Climate Fund, agreed to at last year's climate summit in Cancun, Mexico, to distribute a portion of that money. But last week, the focus turned to the dollars themselves, and from where they would come.

Developing countries are largely insistent that the money come from public coffers in the United States, European countries, Australia, Japan and other wealthy nations. Many argue that the money essentially is compensation to poor countries for the environmental harm industrialized ones caused by emitting carbon dioxide into the atmosphere for decades. That's not, however, the way the United States and others see it -- and they insist developing countries should have no say in where the money they get comes from.
"Our agreement in Cancun was that it was up to developed countries how best to raise this money," Pershing said.

Executive secretary of the UN Framework Convention on Climate Change, Christiana Figueres is quoted as saying: "This is not the best time to be talking about finance, because all developed countries are in a financial crisis."

The other major issue on the agenda at Durban is the future of the Kyoto Protocol, whose current set of carbon curbs expires at the end of 2012.

The host country's ambassador for the talks rejected the possibility of a new system of legally binding cuts to replace Kyoto, saying a too-ambitious agenda could wreck the negotiations.

"Talk of any legally binding instrument would be irresponsible, very irresponsible," said NJ Mxakato-Diseko, South Africa's ambassador-at-large for the conference.

"To even begin to suggest that the outcome of Durban must be a legally binding instrument would be irresponsible, because it will collapse the system."

Canada, Japan and Russia have all said that they won't be signatories to a new "Kyoto" protocol. The world's biggest emitters of the harmless trace gas, Carbon dioxide are also not part of any agreement.

Little Australia is in there punching above it's weight. And going broke.
Posted by Geoff on October 28, 2011 No comments: