Julia Gillard said that the carbon dioxide tax was designed to cause financial pain. (Link) However she and her Green gang have disguised the pain-creating Carbon tax bills with the misnomer of "Clean Energy Future."

Can she point to anywhere in the world where green jobs have benefited that economy? The Spaniards found that for every Green job created (at great expense - more than $750,000 per job) 2.2 jobs were lost.  In a study Gabriel Calzada Álvarez PhD (here) concluded that green jobs needed heavy subsidies and non-green jobs were lost.

As well as the Spanish, the Germans and the French are turning their backs on Green Energy.

The Spanish and Germans are doing it. So are the French. The British might have to do it. Austerity-whacked Europe is rolling back subsidies for renewable energy as economic sanity makes a tentative comeback. Green energy is becoming unaffordable and may cost as many jobs as it creates. But the real victims are the investors who bought into the dream of endless, clean energy financed by the taxpayer. They forgot that governments often change their minds.

As Tim Worstall writes in Forbes:


This is one of the things that really rather annoys me, has done for years. All these people telling us that green jobs, creating green jobs, is going to be the salvation of our economy.

The USA has just had Solyndra collapse. Solyndra was a heavily subsidised manufacturer of thin solar cells. Master Resource reports:


Solyndra’s impending liquidation, replete with 1,100 layoffs and U.S. taxpayer liabilities in excess of a half billion dollars, has put so-called green jobs initiative of the Obama Administration in negative light.


The jobs summit was bolted on to the end (of the tax forum) after Julia Gillard fell foul of the manufacturing unions, the industry sector and elements of her backbench for refusing their request for a thorough inquiry into the state of manufacturing.


The jobs summit was regarded as a trade-off for that.
In the build-up to this week, Gillard and the Treasurer, Wayne Swan, were flat-out downplaying expectations.

With the carbon tax bills, deceptively called Clean Energy Future, being considered by Parliament, MPs should consider future jobs and not future job destroying "clean" energy.
Posted by Geoff on October 11, 2011 No comments:

The Green Gillard Government's Joint Select Committee on Australia's Clean Energy Future Legislation asked for submissions about the carbon dioxide tax legislation. They specifically stated that they "encourage submissions to its inquiry from a wide range of individuals and organisations". There were no terms of reference.


.....only 73 submissions, mainly in favour of the carbon tax, were accepted by the committee, with a 4,500 rejected out of hand.

“This is a clear and unequivocal example of the Government sticking its middle finger up to Australians. Thousands of Australians waded through thousands of pages of legislation in the space of just one week to send their detailed submissions to the Joint Committee. Never in the history of the Australian Parliament has such wide-scale rejection of  opinions taken place. Never before have submissions been rejected in such a manner. This is hubris of the highest order”

“This unnecessary and destructive great new tax will cost the Australian economy a staggering $1 trillion dollars by 2050 even under the most optimistic economic modeling” continued Mr. Andrews.“Labor’s extraordinary abuse of the democratic process to deny Australians to have their say about this legislation is offensive to everyone who worked hard to submit their thoughts, and is a pure and utter disgrace"


There will be no carbon tax submissions accepted against the Clean Energy Bills.


There will be no democracy under any government that I lead. 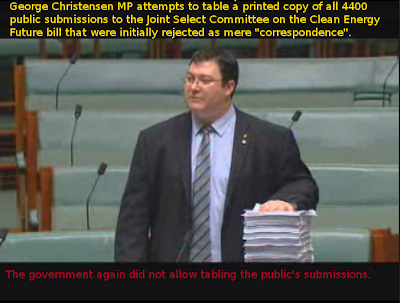