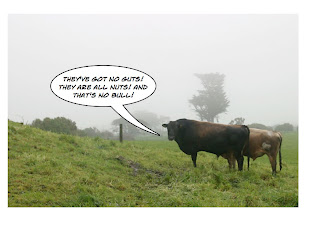 It has been reported that the University of WA has backed away from a debate on Climate Change.

After hearing predictions of the impact that global warming could have on WA farming, Bill Crabtree and David Falconer approached UWA to hold a debate representing both sides of the global warming argument.
They said after getting the initial go-ahead from UWA's vice-chancellor Alan Robson they were told that no speakers could be found for the pro-global warming side and that the speakers the pair had organised to speak against global warming were not credible enough to speak at a debate on UWA grounds.

No Speakers could be found for the Pro-Global warming Side? What, not one single alarmist? What about MS Natalie Latter who was so vocal in her opposition to Lord Monckton's appearance at Notre Dame University recently? What about the 50 academics that Ms Latter organised to  sign an anti-Monckton letter? Not one of them fit to speak for the falsified AGW hypothesis? Or too scared to face the credible anti alarmist team?

Who were these "not credible enough" academics.


William Kininmonth has a career in meteorological science and policy spanning more than 40 years. For more than a decade (1986-1998) he headed Australia's National Climate Centre with responsibilities for monitoring Australia's changing climate and advising the Australian government on the extent and severity of climate extremes, including the recurring drought episodes of the 1990s.
He has extensive knowledge of global climatology, the climate system and the impacts of climate extremes developed through more than two decades associated with the World Meteorological Organization. He was Australia's delegate to the WMO Commission for Climatology and more recently has been a consultant for implementation of its programs. He coordinated the scientific and technical review for the United Nations Task Force on El Niño following the disastrous 1997-1998 event, has participated in WMO expert working groups.
As a member of Australia's delegations to the Second World Climate Conference (1990) and the subsequent intergovernmental negotiations for the Framework Convention on Climate Change (1991-1992), William Kininmonth had a close association with the early developments of the climate change debate.

Dr David Evans worked for the Australian Greenhouse Office (Now the Dept of Climate Change) from 1999 to 2005, building the carbon accounting model that Australia uses to track carbon in its biosphere for the purposes of the Kyoto Protocol. He is a mathematician and engineer, with six university degrees including a PhD from Stanford University.

Not credible enough? How dare they say that Perhaps the UWA has lost much credibility in this cancelled debate.
Posted by Geoff on October 05, 2011 No comments: