Clean Development Mechanisms (CDM) were developed under the Kyoto Protocol. The CDM allows a rich country to offset some of their carbon dioxide emissions by investing in climate-friendly projects, such as hydroelectric power and wind farms, in developing countries. Verified projects earn certified emission reductions (CERs) — carbon credits that can be bought and sold, and count towards meeting rich nations' carbon-reduction targets.
CDM Watch is a watchdog for the CDM program. An extract from a recent  PRESS RELEASE from CDM Watch:

UN Under Pressure to Halt Gaming and Abuse of CDM

The watchdog organisation CDM Watch has confronted the United Nations with new evidence that alleged emissions reductions from HFC-23 destruction projects under the CDM offsetting mechanism are actually increasing global greenhouse gas emissions. The evidence was put forward in an official submission which calls for a benchmark to cut the inflated number of carbon credits generated by these projects by more than 90%.

When the refrigerant HCFC-22 is manufactured, HFC-23, a potent greenhouse gas is an unwanted by-product.


Analysis of monitoring data from all registered HFC-23 destruction projects revealed that CDM HCFC-22 plants are intentionally operated in a manner to maximize the production of offset credits. The analysis indicates that because of the extra CDM revenue more HCFC-22 is produced and far more HFC-23 generated than would occur without the CDM.

“The amount of HCFC-22 production and HFC-23 generation appears to be mainly driven by the possibility to generate offset credits rather than other factors”, summarizes Lambert Schneider who evaluated the data.

To add to this, Nature Magazine has reported that "the international greenhouse-gas emissions-trading system, is seriously flawed." Just as the ClimateGate e-mail furore leaks discredited the IPCC scientists in the lead-up to Copenhagen, we now have CER-gate clouding over the forth-coming United Nations climate-change negotiations in Durban, South Africa, in November.

........a diplomatic cable published last month by the WikiLeaks website reveals that most of the CDM projects in India should not have been certified because they did not reduce emissions beyond those that would have been achieved without foreign investment. Indian officials have apparently known about the problem for at least two years. "What has leaked just confirms our view that in its present form the CDM is basically a farce," says Eva Filzmoser, programme director of CDM Watch, a Brussels-based watchdog organization. The revelations imply that millions of tonnes of claimed reductions in greenhouse-gas emissions are mere phantoms, she says, and potentially cast doubt over the principle of carbon trading.

The Prime Minister has stated that the purchase of carbon credit offsets from other countries will be integral to Labor’s ability to achieve the bipartisan 5% emissions reduction target by 2020. There is a warning to PM Gillard, Greg Combet et al. "In the face of these comments it is no wonder that the United States has backed away from emission trading," Filzmoser says. 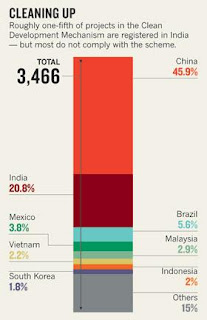 The cable, written on 16 July 2008, was sent by the US consulate in Mumbai, India, to the US secretary of state, and summarizes a discussion of the CDM involving representatives of the consulate and the US Government Accountability Office, along with Indian officials and executives of large Indian companies. At the time, 346 Indian projects had been registered with the CDM's executive board. Today, more than 720 Indian projects have been approved and have gained some 120 million tonnes' worth of carbon credits, a large fraction of the 750 million tonnes issued since 2005 (see 'Cleaning up').

"This will not invalidate carbon trading, but it does go to show that the CDM has serious flaws," says Mark Maslin, a climatologist at University College London. "In India and China, the multiple levels of governance which you need to have in place to make carbon trading work are simply not there."

Willie Eschenbach comments: "I love the CDM. It takes money from people in Europe would wouldn't dream of allowing a hydroelectric dam to be built in their country, and gives it to China to build ... of course ... hydroelectric dams.
Couldn't be a better symbol for the whole climate madness."

"The atmospheric lifetime is truly a scale factor relating (i) constant emissions (Tg/yr) to a steady-state burden  (Tg), or (ii) an emission pulse (Tg) to the time-integrated burden of that pulse (Tg-yr). The lifetime is often implicitly assumed to be constant, independent of the sources, and is likewise assumed to represent the decay time (e-fold) of a perturbation.  These assumptions apply rigorously only for a gas whose local chemical lifetime is constant in space and time such as for the radioactive noble gas radon, whose lifetime is a fixed nuclear property. In such a case the mean atmospheric lifetime equals the local lifetime: the lifetime that relates global emissions to the global burden is exactly the decay time of a perturbation.

This general applicability of the atmospheric lifetime breaks down for greenhouse gases and criteria pollutants whose chemical losses vary in space and time.  NOx, for instance, has a local lifetime of <1 d in the lower troposphere, but >5 d in the upper troposphere; and both times are less than the time required for vertical mixing of the troposphere. In this case emission of NOx into the upper troposphere will produce a larger atmospheric burden than the same emission into the lower troposphere. As a consequence the definition of the atmospheric lifetime of NOx is not unique and depends on the location (and season) of its emissions. The same is true for any gas whose local lifetime is variable and on average shorter than about 0.5 yr, the decay time of a north-south difference between hemispheres and one of the longer time scales for tropospheric mixing.  The majority of greenhouse gases considered here have atmospheric lifetimes greater than 2 yr, much longer than tropospheric mixing times; and hence their lifetimes are not significantly altered by the location of sources within the troposphere. When lifetimes are reported for gases in Table 4.0, it is assumed that the gases are uniformly mixed throughout the troposphere.  This assumption is unlikely for gases with lifetimes <1 yr, "and reported values must be viewed only as approximations."  (My emphasis)

This shows why they are so concerned to fiddle the measured results  of gas concentrtations to try and argue they are "well-mixed" and  have no variability. So all results they don't like are  suppressed as "noise", the many previous results, publicised by Beck, are suppressed, and measurements over land surfaces are forbidden. There is overwhelming evidence that none of the gases are "well-mixed", so all of the Global Warming figures are Phoney.

This appears to be based on the Third IPCC Report (2001)

Have they changed to the new value?

"To kill an error is as good a service as, and sometimes better than, the establishing of a new truth or fact"     Charles Darwin
Posted by Geoff on October 02, 2011 3 comments: