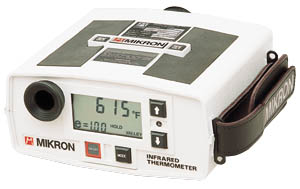 According to author John L Sullivan, evidence from an independent think tank is set to trigger a paradigm shift in climate science.


Researchers from Canada, USA, Mexico and Britain this week announce a startling discovery that destroys 20 years’ of thinking among government climatologists.
Climate scientists had  long believed infrared thermometers measured thermal radiation from the atmosphere  and assumed it was ‘proof’ of the greenhouse gas effect (GHE). Their assumption was that infrared thermometers (IRT’s) were measuring ‘back radiated’ heat from greenhouse gases (including water vapor and carbon dioxide). But damning new evidence proves IRT’s do no such thing.

Mikron is a leading  manufacturer of infrared thermometers (IRTs). Mikron confirms that the IRTs "are deliberately set to AVOID registering any feedback from greenhouse gases."


Thus climate scientists were measuring everything but the energy emitted by carbon dioxide and water vapor.
One of the researchers involved, Alan Siddons, has analyzed the GHE for over six years. He has long condemned the practice of using IRT’s as a means of substantiating the increasingly discredited hypothesis.

Using grains of rice, the presenter shows what a miniscule amount of man made carbon dioxide emissions are in the atmosphere. See also the Galileo Movement's video presentation titled (on this blog) Hair's Breadth of CO2.
Posted by Geoff on September 27, 2011 No comments:

News hot off the Press, The Sydney Morning Herald 26/9/11, reports that a Nobel Laureate 'has resigned from one of the world's leading organisations for scientists in protest at its assertions that the evidence of damaging global warming is ''incontrovertible''. (Link in title>)

Well, perhaps it wasn't that hot off the press. The Climate Sceptics blog reported this item almost two weeks ago  on 15th September -