The graphs here can be accessed from WUWT's widget in the right hand column.

The top one shows that satellite records of the global temperature and it's rises and falls.

The second one shows the atmospheric CO2 levels as measured at Mauna Loa, the largest volcano on earth. Last eruption was in 1984.


Mauna Loa has probably been erupting for at least 700,000 years, and may have emerged above sea level about 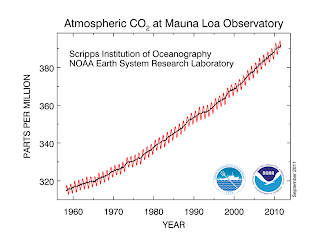 Although the man made CO2 emissions cause runaway global warming hypothesis has been falsified, and correlation is not evidence for the hypothesis, we are constantly told by the alarmists that the rise in CO2 is causing the rise in temperature.

TCS blog has previously pointed out that your editor is not a scientist, but surely there doesn't appear to be a correlation between a constantly rising atmospheric CO2 and a basically level lower atmosphere temperature. 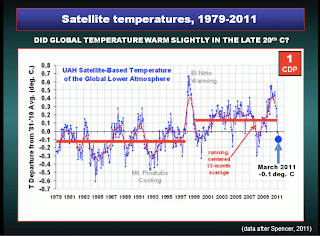 reporting on the peer-reviewed paper by Spencer and Braswell. There has been much fuss amongst the Alarmists denialists.  As Marc Hendrickx writes in his ABC DRUM piece:

To some astonishment the scenario outlined above, in which a journal editor resigns over the publication of a controversial paper, has recently occurred. It involves a paper by Roy Spencer and William Braswell published just last month in the journal, Remote Sensing titled 'On the Misdiagnosis of Climate Feedbacks from Variations in Earth's Radiant Energy Balance'. Like the Antarctic paper in Nature, the paper by Spencer and Braswell went through the normal peer review process. It was promoted by the authors' university through a press release and received a few mentions in the media.
Like the Antarctic paper, some of the media coverage sensationalised the results. The paper also came in for favourable and harsh criticism on the internet, and it appears the paper is not free from error, or methodological issues.
However, rather than allow the peer reviewed system to take care of the issues in the normal manner, the journal's editor, Wolfgang Wagner, took the unprecedented step of resigning over it.

Now, there is another peer reviewed paper that supports the Spencer and Braswell paper and the previous paper by Lindzen and Choi.

Oh dear, now we have three peer reviewed papers (Lindzen and Choi, Spencer and Braswell, and now Richard P. Allan) based on observations that show a net negative feedback for clouds, and a strong one at that. What will Trenberth and Dessler do next? Maybe the editor of Meteorological Applications can be persuaded to commit professional suicide and resign? The key paragraph from the new paper:


…the cloud radiative cooling effect through reflection of short wave radiation is found to dominate over the long wave heating effect, resulting in a net cooling of the climate system of −21 Wm−2.


After all the wailing and gnashing of teeth over the Spencer and Braswell paper in Remote Sensing, and the stunt pulled by its former editor who resigned saying the peer review process failed, another paper was published last week in the journal Meteorological Applications that agrees well with Spencer and Braswell.


With the ever mounting evidence against the falsified AGW hypothesis, it is surprising to see a report like this from Reuters:

(Reuters) - New research, to be published in the journal Climatic Change in November, suggests humankind may have to remove carbon dioxide (CO2) from the atmosphere on a vast scale if emissions keep rising after 2020.
The series of articles provide scenarios which will form the basis of the next report by the U.N.'s Intergovernmental Panel on Climate Change (IPCC) in 2013 and 2014.