Lights out! Rare Earth even rarer due to the Chinese. 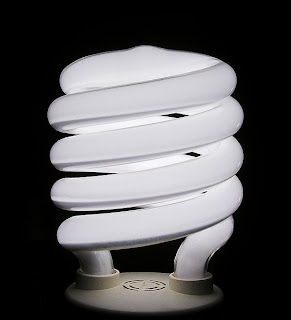 
China produces nearly 95 percent of the world’s rare earth materials, and it is taking the steps to improve pollution controls in a notoriously toxic mining and processing industry. But the moves also have potential international trade implications and have started yet another round of price increases for rare earths, which are vital for green-energy products including giant wind turbines, hybrid gasoline-electric cars and compact fluorescent bulbs.

General Electric, facing complaints in the United States about rising prices for its compact fluorescent bulbs, recently noted in a statement that if the rate of inflation over the last 12 months on the rare earth element europium oxide had been applied to a $2 cup of coffee, that coffee would now cost $24.55.

And why do we need these products?

Letter to the Editors -by Leon Ashby -
Senate candidate for The Climate Sceptics party - The NO CARBON TAX party.

May I explain Julia Gillard's Carbon tax.
Our PM claims 1.6 million green jobs will be created by it by 2020.

If so, then according to the Spanish and UK experience (where 2.2  and 3.7 normal jobs respectively were destroyed per each green job created), the figures of 3.5 million and 5.9 million jobs would evaporate via the new green economy.

Spain now has 21% unemployment and is going broke fast. I cannot see any reason Australia will be any different by 2020.

We will also get another police force chasing peoples' compliance.

The bosses of the green regime will be in Europe and they will dictate ever changing and tighter laws despite never being elected by us.

So if you think we are over-governed now, 2020 will be much worse and its quite possible no Australia government will be able to get rid of the system once started.

Maybe, before the world goes any further, a small country or state that wants a carbon tax should be sponsored by the UN to introduce the best system the IPCC  can design so the world can see how many green jobs it really will create and how lovely the Green police will be.

A $38.6 billion loan guarantee program that the Obama administration promised would create or save 65,000 jobs has created just a few thousand jobs two years after it began, government records show.
The program — designed to jump-start the nation’s clean technology industry by giving energy companies access to low-cost, government-backed loans — has directly created 3,545 new, permanent jobs after giving out almost half the allocated amount, according to Energy Department tallies.

Deniers and Pushers - stop denying and push off.

Who are the pushers? The pushers are those people - scientists, politicians, journalists and bankers - who are for various reasons pushing and continue to push the falsified hypothesis that man made carbon dioxide emissions are causing runaway global warming.

How about this for a classic case of denial? Ferenc Miskolczi authored a paper whilst working for NASA, but, because it went against the hypothesis, NASA (deniers) refused to have it published and eventually the paper was published in a scientific journal in his native Hungary. See discussion on Miskolczi here:


Dr. Miskolczi first published his work in the Quarterly Journal of the Hungarian Meteorological Services in 2004, Volume 108, No 4. He published further statistical proof in the same Journal in 2007, Volume 111, No. 1. In the 5 years since he first published his results, not one peer review has come back disproving his theory, or his Constant. To date, not one scientist has come forward to disprove Miskolczi’s theory that the Earth’s climate is at equilibrium, and that Carbon Dioxide cannot be released in amounts great enough to upset that equilibrium.

The Denial? Well, after The Climate Sceptics party advertised Miskolczi, the Australian Government tried to refute it and actually said that it was only published in a lesser peer review journal. See HERE.

Let's just look at this year. Papers issued that refute the man made CO2 emissions hypothesis:
not to mention this release from National Solar Observatory.

Even Wikipedia admits that there was lower solar activity during the Maunder Minimum. 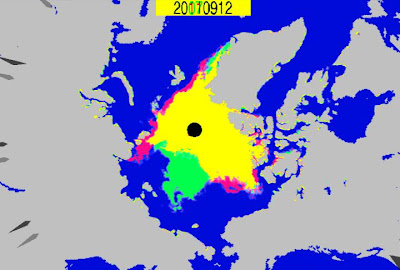 Green is 2011 ice not present in 2007. Red is the opposite. There is a lot more ice today than the same date in 2007.
Not what the deniers say. They say that there is less ice.
Time to re-think who are the deniers and who are the realists.
Posted by Geoff on September 16, 2011 No comments: 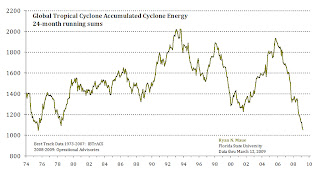 As reported on CO2 Science:


Background
Climate alarmists have long contended that tropical cyclone (TC) activity -- in terms of frequency, intensity and their interaction -- tends to rise with an increase in sea surface temperature. But is this claim correct?

What was done
In the latest study to broach this question, Maue (2011) obtained global TC life cycle data from the IBTrACS database of Knapp et al. (2010), which contains six-hourly best-track positions and intensity estimates for the period 1970-2010, from which he calculated the accumulated cyclone energy (ACE) metric (Bell et al., 2000), which is analogous to the power dissipation index (PDI) used by Emanuel (2005) in his attempt to convince the world of the truth of the climate-alarmist claim.

What it means
In view of the fact that "there is no significant linear trend in the frequency of global TCs," in agreement with the analysis of Wang et al. (2010), plus the fact that the earth is experiencing "this current period of record inactivity," as Maue describes the situation in the final six words of his paper, it would appear that the long-held climate-alarmist contention that global warming increases the frequency and intensity of tropical storms is simply not true.

Read more here
Posted by Geoff on September 16, 2011 No comments:

Today Nature.com has reported that


For Paul Nurse, few things are off-limits. Since taking over as president of Britain's Royal Society in December last year, he has been overseeing a strategic review that is likely to lead to the first change to the society's charter since it was signed by King Charles II in 1662

He hopes to boost the society's role in government decision-making by fostering greater involvement of its roughly 1,500 fellows and foreign members in preparing reports, potentially with the help of more policy staff. Nurse also wants to expand the number of authoritative and influential reports on key issues, such as nuclear power, climate change and the definition of life.