The Changing Climate of Global Warming

Thank you for your letter inquiring about my membership. I did not renew it because I can not live with the statement below:

Emissions of greenhouse gases from human activities are changing the atmosphere in ways that affect the Earth's climate. Greenhouse gases include carbon dioxide as well as methane, nitrous oxide and other gases. They are emitted from fossil fuel combustion and a range of industrial and agricultural processes.

The evidence is incontrovertible: Global warming is occurring.

If no mitigating actions are taken, significant disruptions in the Earth’s physical and ecological systems, social systems, security and human health are likely to occur. We must reduce emissions of greenhouse gases beginning now.


In the APS it is ok to discuss whether the mass of the proton changes over time and how a multi-universe behaves, but the evidence of global warming is incontrovertible? The claim (how can you measure the average temperature of the whole earth for a whole year?) is that the temperature has changed from ~288.0 to ~288.8 degree Kelvin in about 150 years, which (if true) means to me is that the temperature has been amazingly stable, and both human health and happiness have definitely improved in this “warming” period.

One in Four Believe in Gore; 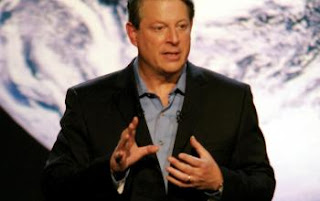 A new poll by Rassmussen Reports in the US has found that only one in four believe Al Gore to be an expert on Global Warming.

Read more HERE.
James Taylor is the Managing Editor of Environment & Climate News, a national (US) monthly
Posted by Geoff on September 15, 2011 No comments: