By Dr D Weston Allen
The Climate Institute is an independent research organisation that works with community, business and government to catalyse and drive the change and innovation needed for a low carbon economy and culture.  Established in late 2005, it is primarily funded by a donation from the Poola Foundation (Tom Kantor Fund).

The Climate Institute recently prepared a report for the ACF and AMA: "A Climate of Suffering: The Real Cost of Living with Inaction on Climate Change."   This report predicts an increase in mental health problems due to increasing catastrophic weather events linked to climate change.  It is based on questionable assumptions and evident bias.  Here are the facts:

1.       Extreme Weather Events: Global warming from 1910 to 1940 was primarily due to solar influences and fairly evenly distributed across the year.  Since the 1970s, however, the coldest nights have warmed far more than have the warmest ones.[1]  This warming of winter nights is consistent with both increasing GHG and urban heat contamination, but not with more intense or frequent heatwaves in summer.

In eastern Australia, heatwaves, droughts and bushfires are strongly associated with dry El Niño events, and these tend to dominate when the Interdecadal Pacific Oscillation (IPO) Index is positive; and La Niñas (with flooding) dominate when the IPO Index is negative. [2]  Verdon and Franks (2006)[3] found that this relationship extended back four centuries; and Franks (2002)[4] found a correlation with the solar cycle.  McLean et al (2009)[5] found that El Niño events are not the result of tropospheric warming due to GHGE but rather the predominant cause of warming.

The IPCC stated, in its 2007 Summary for Policymakers: “There is no clear trend in the annual numbers of tropical cyclones.” [6] This supported the earlier 2001 IPCC report which stated: “Changes globally in tropical and extra-tropical storm intensity are dominated by inter-decadal to multi-decadal variations, with no significant trends over the 20th century.”  Evidence that there is nothing unusual about recent cyclone activity comes from an analysis of stalagmites in a Chillagoe cave in North Queensland.  Because oxygen-16 isotope is lighter than oxygen-18, water vapour reaching high altitudes and precipitating as cyclonic rain contains a lower proportion of the latter.  Jonathon Knott and colleagues at the James Cook University used this to analyse cyclonic activity over the past 780 years.  Importantly, he noted that: “. . . every intense cyclone (i.e. AD 1911, 1918, 1925, 1934, 1986 as determined by barometer or damage to urban infrastructure and loss of life) to make landfall in the (400km) region since 1907 is registered by a peak in the isotope depletion curve.”[7]  As shown in figure 1, the most intense cyclones preceded white settlement. 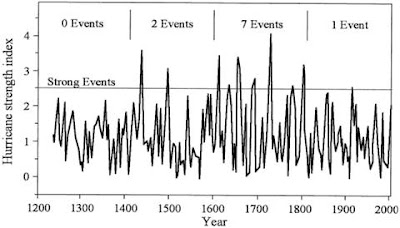 2.       Global warming from GHGE:  Scafetta and West[8] estimated “. . . that the sun contributed as much as 45 percent to 50 percent of the 1900-2000 global warming and 25 percent to 30 percent of the 1980-2000 global warming.”  From a multi-scale analysis of historical global temperature changes, researchers at China’s Nanjing University concluded that the 20th century anthropogenic “influence weight on global temperature variation accounts for no more than 40.19%, smaller than those of the natural climate changes.” [9]

4.       Cost of combating climate change:  Since going big with wind and solar in 2007 in order to meet Kyoto targets, Spain’s unemployment rate has rocketed from 8% to over 20%.[11]   On 17 July, 2011, Andrew Gilligan reported in The Telegraph (UK): “Last week, new figures showed that rising bills have driven another 700,000 people into “fuel poverty”.  But the impact on manufacturing could deliver a double whammy: not only costing you money, but also costing you your job.”  Even solar panel manufacturing in the developed world, including Australia (Silex), is closing down because it is unable to compete with China’s cheap labor and energy costs.

In his report The Myth of Green Jobs, published on 2 September 2011 by the Global Warming Policy Foundation, Professor Gordon Hughes (University of Edinburgh) dispels the myth that green energy policies will stimulate the economy and create more jobs by finding that:


"Claims by politicians and lobbyists that green energy policies will create a few thousand jobs are not supported by the evidence. In terms of the labour market, the gains for a small number of actual or potential employees in businesses specialising in renewable energy has to be weighed against the dismal prospects for a much larger group of workers producing tradable goods in the rest of the manufacturing sector," Professor Hughes said.

5.       Global warming benefits:  Global food production has increased as a result of rising atmospheric CO2 levels[12] and global warming.[13]  Several studies show that another 1⁰C of warming would result in a 2% increase in GDP.[14]  Warm periods are significantly better than cold periods for human health, growth, longevity and prosperity.[15]  Famine and disease plagued Europe during that preindustrial Little Ice Age, [16] several degrees colder than the Holocene maximum and significantly cooler than the Roman and medieval warm periods.[17], [18]   Despite global warming from 1916 to 1937, malaria mortality in the Mississippi declined four-fold as incomes increased.[19]  Mortality from tuberculosis and typhoid also declined dramatically.[20]  Dengue is likewise related more to living standards and public health measures than to climate.[21]

Thomas Moore (1998) found mortality in the United States from 1952 to 1967 to be 13% higher in winter than in summer.  Despite further global warming during the 1980s, US summers were still 16% less lethal than winters.[22]  And despite nearly 1⁰C of effective temperature-humidity increase from 1964 to 1998, heat-related mortality in 28 of the largest US cities declined markedly.[23]  Five times as many Europeans still die from cold each year than from heat.[24]  Despite warming from 1976 to 2005, there are 120 times more deaths in the UK due to cold than to heat each year, largely due to adaptation measures.[25] Improved economies and technologies since the 1920s have resulted in a 99% decline in the global annual death rate from all weather-related natural disasters – from 242 to just 3 per million.[26]

6.       Climate sensitivity and 21st century warming: Tracing the present near-linear trajectory to 2100, atmospheric CO2 levels would reach about 560ppm (5.6 parts per 10,000), which is double the generally accepted pre-industrial level.  According to the IPCC’s AR4 in 2007, that doubling would result in “. . . a most likely value between 2⁰C and 3⁰C.  . . .  The transient climate response, based on observational constraints, is very likely larger than 1⁰C and very unlikely to be greater than 3.5⁰C at the time of atmospheric CO2 doubling.” [27]  Over a third of that doubling and potential warming is already behind us.  Further warming this century is therefore very unlikely to be more than 2⁰C.  From NASA Aqua satellite observations of global radiative imbalance, sea surface temperatures (SST), and tropospheric temperature variations, Roy Spencer deduced that short term feedbacks in the real climate system are strongly negative and derived a climate sensitivity (to a doubling of atmospheric CO2) of just 0.6⁰C.[28]  Lindzen and Choi determined a similar climate sensitivity using Earth Radiation Budget Experiment (ERBE), CERES (2000-2008) and sea surface temperature data. [29]  [30]  Global warming this century is therefore unlikely to exceed 1⁰C even if no action is taken on GHGE.

7.       Climate neurosis:  A 2007 survey of 600 Australian children aged 10 to 14 revealed that 44% are nervous about the future impact of climate change and, astonishingly, ‘a quarter honestly believe the world will come to an end before they get older.’ [31]  A subsequent survey of 200 NSW schoolchildren likewise found that fears over climate change are producing feelings of powerlessness and despair; ‘Many children thought they would not survive to adulthood.’ [32]  And what is this ‘climate neurosis’ doing to their career aspirations?


Dr Allen is the author of The Weather Makers Re-examined where these and other medical issues relative to climate change are discussed in more detail. Available through www.irenicpublications.com.au He has an established record of commenting on medical issues relating to the CC debate, often writes articles in medical journals.
Posted by Geoff on September 12, 2011 No comments: