"Who will be First to Cop the Carbon Chop?"

A print-ready copy of this issue of "Carbon Sense" can be downloaded from link in title.


It is not possible to achieve the government's planned cuts to the production of carbon dioxide without significant shrinkage of our main industries.

There are only two ways to achieve their unrealistic emission reduction targets.

The destructive but honest way is to allow the shrinking targets and rising taxes to force closures or relocation for our backbone industries.

The dishonest way is to pay billions of dollars to overseas carbon shysters who, in return for our bribes, "promise" to make the reductions on our behalf. This will achieve nothing except pauperisation of Australians.

The tax apologists will claim - 'but the tax only applies to the top 500 polluters'. Every company hit with the carbon tax must pass it on to all those who use their products. Soon every industry and consumer will feel the costs, even if they do not understand the sneaky mechanism.

People who think the cuts can occur painlessly have not looked at the hard facts of our industries.

It's not possible to make steel without generating carbon dioxide. No carbon tax can change that.

It's not possible to make cement or brew beer without generating carbon dioxide.

It's is not possible to run a car, truck, train, tractor, ship or plane on oil, gas, diesel or petrol without generating carbon dioxide.  Even electric cars, trains and elevators get their energy mainly from coal or gas. As for wind power, 70% of its "capacity" will be delivered by the backup gas facilities, all producing carbon dioxide.

The Australian government plans to reduce the production of harmless carbon dioxide by 5% (or maybe 25%) by 2050, despite increasing population.

Which industry will be first to cop the carbon chop? They should start by blocking all emissions from Parliament House.

Or is the carbon tax just about grabbing a new source of government revenue?


How to Solve the Global Warming Crisis –
Stop Breathin' 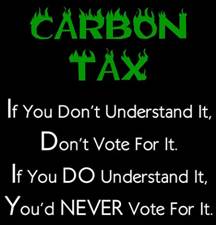 For those who like rap music, have a listen to an anti-carbon tax tune:
http://www.youtube.com/watch?v=HebEGr5MXSU


Climate Change Reconsidered.
A comprehensive new report on all aspects of the climate change debate written by serious and qualified scientists has just been published. According to the new report, “natural causes are very likely to be the dominant” cause of climate change that took place in the twentieth and at the start of the twenty-first centuries.  “We are not saying anthropogenic greenhouse gases (GHG) cannot produce some warming or have not in the past. Our conclusion is that the evidence shows they are not playing a substantial role.”

The authors of the new report go on to say “the net effect of continued warming and rising carbon dioxide concentrations in the atmosphere is most likely to be beneficial to humans, plants, and wildlife.”  For an Executive summary see:
http://www.nipccreport.org/reports/2011/pdf/FrontMatter.pdf


Anti-Carbon Tax Rally, Perth.
The next big anti-carbon tax rally will be held in Perth. Pls come along or pass the invitation on to someone who can attend. The rally will be held on Sunday, Sept. 18th, at Langley Park on the Perth foreshore starting at 2 pm. A leaflet can be downloaded from:
http://carbon-sense.com/wp-content/uploads/2011/09/election-now-rally.pdf


Will a Carbon Tax stop our Natural Disasters?
Australia's carbon tax will have NO HOPE of changing the climate of the world or of Australia. It is thus either just costly symbolism or destructive waste, probably both.

Does anyone seriously believe a carbon tax would have reduced the damage and lives lost in the Victorian bushfires? Would it have diverted Cyclone Yasi or reduced the Brisbane floods? No, in fact the reverse. By taxing the community and then wasting the proceeds on purchasing foreign tax credits, funding handouts to UN hangers-on or building new climate bureaucracies the community is deprived of funds that could have been used for better roads, emergency helicopters, flood proof airports, higher bridges or drought proof water supplies.

Read what Professor Bob Carter had to say on this subject to the “Convoy of No Confidence” protest in Canberra on August 22, 2011:
http://www.quadrant.org.au/blogs/doomed-planet/2011/08/carter-in-canberra

Jo Nova has the last word "Only an idiot would think a tax will change the weather". See:
http://joannenova.com.au/2011/09/carbon-tax-going-through-next-week-alp-set-to-be-global-patsies/