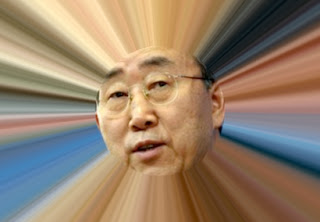 Creedance sang " I see the bad moon arising, I see trouble on the way..."

In  the Solomons, Ban Ki Moon said that the seas are 'arising.' Can we give him credence?

Multiple tsunamis are pounding the islands and the economy.

Is it as bad as the UN Secretary General says? Well,  according to the Bureau of Meteorology's South Pacific Sea Level and Climate Monitoring Project, the sea level trend (see image) is 8.6mm/year - so in the 90 odd years to 2100 (assuming that the rise continues at the same rate and is not diminishing)1 the projected rise would be 8.6x90=774mm or about 30 inches worst case scenario.


The Solomon Islands was the first Pacific country to benefit from the Adaptation Fund for Climate Change. And the Solomon Islands has secured more than five and a half million dollars in funding from the United Nations Collaborative Programme on Reducing Emissions from Deforestation and Forest Degradation - what is known as REDD - in Developing Countries.

Donna Laframboise on her blog quotes the UN Secretary General as saying: "..Your very existence is threatened. Therefore the UN shares your concerns very much. Climate change is the greatest threat to the livelihood, security and wellbeing of the people of Solomon Islands and the pacific region."

How can a rise in sea level of less than 2 feet spread over nearly 100 years possibly be mistaken by the head of the UN as the greatest threat to the livelihood, security and wellbeing of the inhabitants of these islands?
Why would he publicly suggest to a people struggling to get their act together that their most pressing concern has nothing to do with their own behaviour and is not their own responsibility?
I mean, he actually told these people that they’re entitled to financial and technological support from more prosperous nations who’ve allegedly “made this climate change.”
The poor are, indeed, at highest risk from whatever nasty effects might be associated with climate change. But all the poverty and strife in the Solomon Islands is not the fault of rich countries.