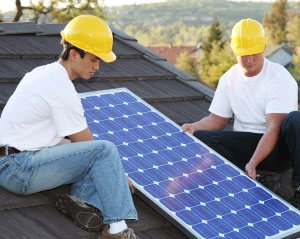 
“Clean technology is the next wave of innovation that Silicon Valley needs to capture,” the mayor said, noting that the San Jose City Council had committed to increasing the number of “green jobs” in the city to 25,000 by 2022. San Jose currently has 4,350 such jobs, according to city officials.
But SolFocus assembles its solar panels in China, and the new San Jose headquarters employs just 90 people.
In the Bay Area as in much of the country, the green economy is not proving to be the job-creation engine that many politicians envisioned. President Obama once pledged to create five million green jobs over 10 years. Gov. Jerry Brown promised 500,000 clean-technology jobs statewide by the end of the decade. But the results so far suggest such numbers are a pipe dream."
“I won’t say I’m not frustrated,” said Van Jones, an Oakland activist who served briefly as Mr. Obama’s green-jobs czar before resigning under fire after conservative critics said he had signed a petition accusing the Bush administration of deliberately allowing the Sept. 11 terrorist attacks, a claim Mr. Jones denies.
A study released in July by the non-partisan Brookings Institution found clean-technology jobs accounted for just 2 percent of employment nationwide and only slightly more — 2.2 percent — in Silicon Valley. Rather than adding jobs, the study found, the sector actually lost 492 positions from 2003 to 2010 in the South Bay, where the unemployment rate in June was 10.5 percent.


The notoriety of Obama's and the Democrat's green job fiasco is finally being picked up by the leading pulpit of green-leftism in the U.S. - the New York Times. The gullibility and idiocy represented by the article brings a certain level of schadenfreude as greenie/leftie/liberal cope with the obvious, yet continue to pursue a failed strategy they do excel at: wasting taxpayer monies.