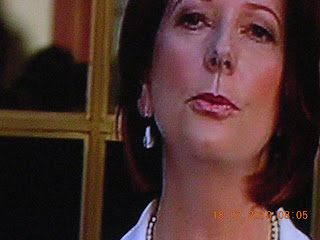 
THE Auditor-General will investigate Julia Gillard's $12 million carbon tax advertising campaign and its claims the tax will apply to only 500 companies and that nine out of 10 households will be compensated for price rises.
In a letter to Tony Abbott, Auditor-General Ian McPhee has agreed to include the carbon tax ad campaign in a broad Australian National Audit Office probe into campaign advertising that had already begun.
The audit follows a request by the Opposition Leader last month for a probe after he alleged the government's claims about the number of companies that would pay the tax and the household compensation had not been adequately verified.

Why don't the same rules apply to Government advertising that apply to all other advertisers? Mr Abbott disputes the "the claim that it would apply to only 500 companies and that nine out of 10 households would be compensated for the carbon tax."

Ms Gillard, at a forum in Perth on Thursday Night said: ""If we can cut carbon pollution by 160 million tonnes and still have more jobs, still have economic growth . . . why wouldn't you do it?"