ACCURACY OF TEMPERATURE TRENDS and  THE CARBON CYCLE REVOLUTION.

I have frequently argued that the claimed temperature "trends" from the "Mean Annual Surface Temperature Anomaly Record" greatly exceed the values claimed. It is difficult, however, to obtain a reliable figure from all the operations that are carried out to obtain the final global figures.

Lubos Motl has now made an analysis of  58,579 monthly "trends" from the  5113 ""raw data" files which have recently been released by Hadley/CRU, at

He gives the following Gaussian curve arising from this analysis:- 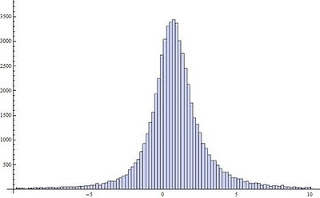 This has  an average of 0.76 ºC per century with a standard deviation of ±2.36ºC .  For 95% Confidence limits (one chance in 20 that the true value is in  the range) is therefore ±4.72ºC, 6.2 times the average  which means that it has almost zero statistical significance. Indeed it means that 30% of the stations showed a cooling trend, far more than have been identified previously

where he gets the following distribution curve:- 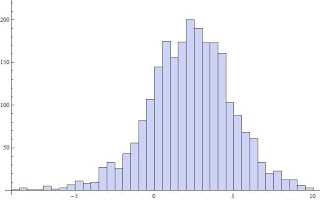 This is skewed because the temperature has fluctuated. The mean is 2.24ºC ± 14.08ºC,  almost zero statistical significance and 31% of the stations show cooling this time.

This analysis is only the beginning, because it does not take into account the unrepresentative samples, which change frequently, and involve taking the mean of a maximum and a minimum, or the averaging to get a monthly figure.

Why should anybody believe these "trends"?

with a podcast of his lecture at

He presents very convincing arguments to show that increases in atmospheric carbon dioxide are unrelated to human emissions from fossil fuel combustion and  extremely convincing evidencve that they are related to global temperature fluctuations. They are therefore predominantly natural, not  man-made,

He is yet to publish a full paper on the subject, but some of his graphs can be obtained by saving the web page of the first reference.

"To kill an error is as good a service


as, and sometimes better than, the


establishing of a new truth or fact"
Charles Darwin