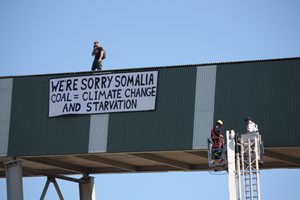 Also reported HERE by NBN News and HERE by the (Newcastle) Herald.
Posted by Geoff on August 08, 2011 36 comments:

Al Gore has been gored so many times recently, it's a wonder there are any believers in Man-made Global Warming Alarmism. It's a wonder that anyone could want to be a Gore's Climate Connectors.

What about it, Cate Blanchett? What to review your thinking? Read Climate Depot's Marc Morano's destruction of Al Gore's speech to the Aspen Institute in Colarado. (Aspen had an Amazing Snow Season!)

Defeated Gore unleashes: 'It's no longer acceptable in mixed company, meaning bipartisan company, to use the goddamn word 'climate'...we cannot possibly come to an agreement on it' - August 5, 2011


Gore Claim: 'It may be volcanoes.' Bullshit!'
Reality Check: Gore has not been keeping up on the latest dat and peer-reviewed studies. Yes, volcanoes can and do have a big impact on global warming.


Gore Claim: 'It's not getting warmer.' Bullshit!'
Reality Check: Gore may want to scream 'Bullshit' as his pal, UN IPCC Chair Pachauri who has acknowledged global warming has stopped.


CHALLENGE:
Cate Blanchett and all other Climate Connectors as well as your Union Sponsor/Partners.
Go to The Climate Depot site and see how the foul-mouthed Gore stacks up against "the Science."

The Daily Telegraph has revealed that part of the previous Labor Government's $5.2 billion gained for selling electricity retail companies includes spending $1.3 billion on setting up a new coal mine.  The proposed open cut coal mine would be at at Cobbora in western NSW, about 22km south west of Dunedoo. The project application covers 288 square kilometres and it is proposed to mine 30 million tonnes per annum run-of-mine coal. The majority of coal produced would be used in the State's power stations to generate electricity.


THE state government will have to begin mining coal at the Cobbora mine to supply power stations by 2015 or face having to pay electricity companies hundreds of millions in compensation.
Treasurer Mike Baird revealed the latest "booby trap" left by the previous Labor government in the wake of its botched power sale. Mr Baird has revealed there is a danger of the government facing a compensation bill from the mine as well.

"Should the state not deliver the coal that is contracted, there is a liability figure for the first year of more than $100 million and there is an ongoing figure for the remaining 17 years of the contract," Mr Baird said.
"Over the term of the contract we could be talking hundreds of millions of dollars that could hit the state, should we not meet the obligations that have been left behind."
Mr Baird said he was "surprised" the previous government had not revealed the Cobbora liability.

Study the Climate or study a Computer Screen?

The Australian (link in title) reports:


Charles Finkl, the editor-in-chief of the Journal of Coastal Research, which published a peer-reviewed study by NSW researcher Phil Watson that rekindled a fierce debate about sea level rises, said modelling was necessary but should be taken with a grain of salt. CLIMATE researchers should spend less time in front of computer screens building predictive models and more time in the field observing and interpreting "hard or real data", an internationally recognised coastal science expert and publisher has warned.

The Journal of Coastal Research recently published a peer reviewed paper by Phil Watson, the NSW Department of Environment and Climate Change's coastal unit team leader. Watson's paper called into question one of the key criteria for large-scale inundation around the Australian coast by 2100 -- the assumption of an accelerating rise in sea levels because of climate change.


Based on century-long tide gauge records at Fremantle, Western Australia (from 1897 to present), Auckland Harbour in New Zealand (1903 to present), Fort Denison in Sydney Harbour (1914 to present) and Pilot Station at Newcastle (1925 to present), the analysis finds there was a "consistent trend of weak deceleration" from 1940 to 2000.

In the Australian report Charles Finkl is quoted as saying: "The CSIRO more or less agrees with Watson but does not want to admit they have have not got it quite right previously. I am not in favour of models for many reasons. They get better over time, and we need to use them, but with a grain of salt. We should instead use our brains and hard or real data to make interpretations. Many researchers do not even go into the field any more because they think the world exists on their computers. Big mistake."

Professor Finkl does not believe global warming and sea-level rises are caused by human activity but publishes the peer-reviewed work of researchers who do. He said the debate - and implications for coastal planning laws - was not whether sea levels were rising, but how quickly. "The real problem with the models is they show an exponential rise in the rate of sea-level rise, the so-called hockey stick approach," he said.