In an interesting post, Donna Laframboise writes on "No Frakking Consensus" of the Pew Environment Group: 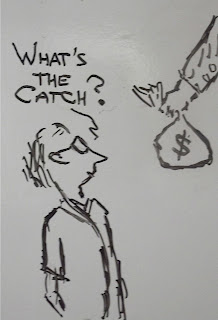 "....it’s an environmental advocacy outfit. Its entire purpose is to draw more attention to environmental concerns. Of all the problems and issues out there (from inadequate inner-city schools, to horrible diseases desperate for research funding, to the wrongfully convicted), this organization thinks the environment is top-of-the-list.
There’s nothing wrong with that. Per se. But what happens when a group with a political agenda becomes a persistent source of funding for a particular category of scientists? Say scientists whose specialty is the oceans and marine life. Say via a program that has been running for more than 20 years – long enough to have influenced an entire generation of research?"


"Do we imagine that the work of such scientists would ever be taken seriously again? Surely, in many circles, their findings and their judgment would henceforth be considered suspect. Which brings me to Jane Lubchenco."

"What the announcement (of her appointment) neglected to mention is that, at the time she was nominated, Lubchenco was Vice Chair of the board of the aggressive, influential, and outrageously wealthy Environmental Defense Fund (I’ve blogged about the EDF here).
Nor did it mention that in, 1992, she became a Pew Fellow – which means she accepted $150,000 from the activist entity I’ve described above."

Laframboise then mentions that Lubchenko was formerly a trustee of the World Resources Institute whose board includes Al Gore.


"Canadian writer Donna Laframboise track some of the massive amount of private money going to activist scientists who support the Pew Trust's political and 'environmental' policies.  Scientists who accept large grants and go on to bias their research in favor of the political objectives of those who are paying them are certainly guilty of scientific misconduct.  It is a very widespread problem today, but one that rarely makes news except perhaps for the odd polar bear researcher."