Convoy of No Confidence 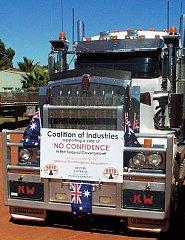 The Convoy of No confidence started fairly small but has ballooned. It will be the biggest protest that Australia has seen, lasting over six days. Convoys are starting from various points around Australia, converging at Canberra on the 22 August. It was started by National Road Freighters Association (NFRA) President Mick Pattel. Hear Mick talk to John Laws HERE. Mick is an owner driver and operates a livestock transport from Richmond in North West Queensland. He is second generation, the business having been started by his father.


The Convoy has been organised in the Just Grounds Community, linked in the title above.


Something beautiful is unfolding. From all over Australia, people whose businesses and jobs are being driven into the ground by spectacular government mismanagement are gathering to drive from the corners of the continent to converge on Canberra to demand an election.

Just Grounds Community member and Journalist John Mikkelsen aka Mikko has written about the Convoy on The Punch.


What originated as a plan for a peaceful protest starting from Darwin and calling for an early election has gone viral in the space of less than a week. Organisers, the National Road Freighters Association, soon realised from expressions of interest and promises to participate that Darwin would not be able to cater for the expected numbers, and routes have now been planned for eight separate convoys (now eleven -gb) including several in Queensland and others in all mainland states.
The massive response gives some indication of the level of discontent which has been reflected in every major opinion poll in recent weeks and which shows no signs of improving any time soon.
Various factors have contributed, with the controversial carbon tax and its $25 million promotion and advertising campaign topping the list.  Backing this are issues such as the still unresolved live cattle export trade, the Malaysian refugee deal apparently about to be announced with a country which is not a signatory to the UN Refugee Convention, plus mixed messages about the effectiveness and likely costs of the NBN service to consumers if and when it is finally rolled out to communities across the nation.

Later Mikko writes of  Cate Stuart, who has done an amazing job in helping organise and co-ordinate the convoy.


“The thrust of this is for an election and to let the politicians listen to the people. I am all for democracy, I am just a mum but thousands of people are thinking the same thing,” Mrs Stuart said. She said the Prime Minister Julia Gillard had recently stated that “Democracy is not an opinion poll”.
“Quite right, Prime Minister, democracy is a vote,” Mrs Stuart said.

Cate is now known as "Convoy Cate from Charleville." Listen to Cate on ABC's Counterpoint HERE.

The convoy will deliver a petition to Parliament.

So, if you really want to return to a democratic Australia, think of joining the convoy. Trucks, Camper-vans, cars, anything that moves will be joining the different convoys as they head to Canberra.