Hallelujah! Relief from Global Warming is within reach. 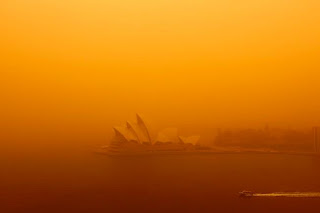 Dust can save us from warming and plunge the world into a new ice age.


Alfredo Martinez-Garcia at the Swiss Federal Institute of Technology in Zurich and colleagues have used marine sediment cores taken from an area of the Atlantic Ocean just north of the Southern Ocean to look back 4 million years. They say dust levels have been twice as high during deep glaciations throughout that time (Nature, DOI: 10.1038/nature10310).

"Dust deposition in the Southern Ocean increased with the emergence of the deep glaciations that characterise the late Pleistocene," says Martinez-Garcia.

Dust contains some iron particles. The iron in the particles  can promote plankton growth.

When blown into the sea, the iron it contains can fertilise plankton growth on a scale large enough to cause global temperatures to drop. The finding adds support to the idea of staving off climate change by simulating the effects of dust - perhaps by sprinkling the oceans with iron filings.

Iron-rich dust falling on the ocean has long been known to spark blooms of plankton, and researchers suspect the process could have intensified the ice ages that have occurred over the past few million years.

Thanks Michael Trigoboff
Posted by Geoff on August 05, 2011 No comments: 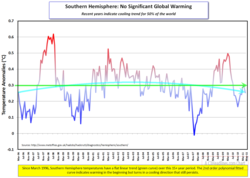 Have you thought it has been cold lately?


The Southern Hemisphere is in a cooling phase. See C3's Graph attached from the UK Met Office or go to LINK for larger version.


Steve Goddard reports that "Temperatures on the Antarctic Peninsula in degrees F. Almost 20 degrees below normal."
Posted by Geoff on August 05, 2011 No comments: