Reds under the Bed or consuming the Greens?

When Lord Monckton this week at the Press Club said that the Communists had taken over the Greenpeace organisation, the scoffs of journalists resounded in the room. He then advised them to look at the Communist Manifesto and compare it with the Australian Greens Party Policies.

I wonder how many have done their homework.

Today, one of Labor's finest and a former Minister for the Environment Barry Cohen said something similar.


"The Greens dismay me quite a lot. I've had a lot of dealings with them.They're not the same as they were when I was Minister."

He said back then there were more people in the Greens that were genuinely concerned about the environment.

"The trouble is that, with the collapse of Communism, the left wing of the Labor party, they've infiltrated the Greens and now to a great degree control it."

I wonder if the Canberra Press Gang are still scoffing or are starting a rethink. I am sure that they will all be at Tuesday's National Press Club luncheon when visiting Head of State Vaclav Klaus - the Czech President -  talks of Communism.
Posted by Geoff on July 24, 2011 No comments:

Self destructive tendencies in Germany

Originally Published in the Oregonian
-"Quem deus vult perere, dementat prius -- Whom the gods would destroy, they first make insane"

Germany's precipitous decision to shutdown eight nuclear power plants last March and the remainder by 2022 is curious coming from a German Chancellor with a PhD in physics. Under pressure from Greens who exploit scientific illiteracy and promote fears they find useful, Chancellor Angela Merkel has become a pure politician. Nuclear power evokes many fears in Germany. As in the English- speaking world, irrational perceptions about technical matters from nuclear energy to alternate energy to global warming transcend all reason.

The German political situation started to meltdown after the most powerful earthquake and tsunami in modern times struck Japan in March. 15,000 people lost their lives, and the Japanese nuclear power installation at Fukushima made ominous headlines for weeks. With reports of radiation leaking from three reactors and large evacuations of the local population, European Energy Commissioner Gunter Oettinger of Germany declared the nuclear incident to be an “apocalypse.” Three reactors out of eleven in the Fukushima area were completely destroyed, resulting in large economic losses and a long complex cleanup. But the widespread devastation elsewhere was the real tragedy.

Of the huge death toll, not a single death was attributed to nuclear radiation. Two workers at Fukushima died from drowning and one from a heart attack. Although two other workers received non-life threatening radiation burns from standing in highly radioactive water, no one died from radiation sickness. The large amount of dangerous iodine-131 initially released has largely decayed away.

Long term effects attributable to radiation exposure should be minimal, even among those workers who received the largest doses as long as established procedures to limit total exposure were followed. In the far worse Soviet Chernobyl accident in1986 where the reactor burned and workers were unprotected, 57 died from direct effects and 500 in the local population from telltale thyroid cancer. But the vast majority of the population escaped unharmed.

The rational response to major industrial accidents is to carefully understand what went wrong and make improvements to existing procedures and infrastructure to minimize the chance of a recurrence. Because Germany uses far better reactor designs than the Soviets had and experiences few giant earthquakes and tsunamis like the Japanese, these disasters are not particularly pertinent to them.
Moving toward more wind and solar power was the politically expedient decision for Chancellor Merkel, but it has huge practical and environmental drawbacks. Because windmills and solar arrays produce very erratic electricity, backup from new turbine power plants burning natural gas is necessary. Leaving conventional steam plants running as 'spinning reserve' is hugely wasteful.
That raises the inconvenient question: why not just build advanced and highly efficient gas turbines and forget about expensive alternate energy? Wind and solar installations typically fail in 20 years, just as they have paid back the energy and cost of their construction. In other words, they produce little net energy, making them very inefficient. Their erratic nature also means that they reduce the reliability of the grid.

Germans are likely to get the additional natural gas they will need from their present supplier, Russia. Why? Because Germany also has a phobia about the shale-gas revolution that is sweeping the rest of the world. Germany has meager gas reserves, but friendly neighbors like France and Poland now have huge reserves.

If Germans want to avoid shipping the remainder of their industry to China and shivering in the dark when the sun is not shining and the wind is not blowing, they will have to choose between viable sources of electricity: nuclear, natural gas, and coal. The smart move for Chancellor Merkel would be to get full value out of Germany's existing nuclear power plants during their design life and then consider environmentally friendly gas turbine replacements.

Although nuclear power has many advantages and new reactor designs coming from places like Oregon State University show great promise, natural gas appears to be the most competitive solution for advanced industrialized societies needing clean reliable power in coming decades.

Is Germany still capable of making rational decisions? Very recent news suggests that they may restart one nuclear reactor to avoid power shortages this coming winter. They are also talking about using millions of euros from a fund for promoting alternate energy to encourage new coal and natural gas power plants. These are steps back from the abyss.

Gordon J. Fulks, Ph.D. lives in Corbett, Oregon and can be reached at gordonfulks@hotmail.com. He holds a doctorate in physics from the University of Chicago, Laboratory for Astrophysics and Space Research. 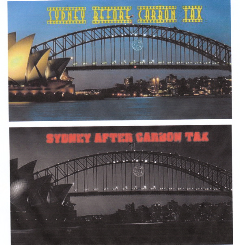 The No Carbon Tax Coalition will hold a a No Carbon Tax/Election Now march in Sydney on Sunday, 31 July 2011 at 12 noon.

Marchers will assemble at Hyde Park North, near the Archibald Fountain, and at 12:30pm, march down Elizabeth Street to Belmore Park.

People are encouraged to bring signs, banners, loud voices,  loud hailers and Australian flags and send a message to Canberra that the majority of Australians want a new election and for Julia Gillard to ditch the carbon tax.

This is Sydney's chance to voice opposition for the carbon tax and call for a new election.  People are encouraged to bring friends and family - especially those who have never attended a march or a rally.

It will also be a lead into the big one:  the No Carbon Tax/Election Now! Rally in Canberra, organised by Jacques Laxale and the team from CATA, for Tuesday, 16 August, 2011.