As reported in these pages - The Next Climate Debate Bombshell - "CERN in Geneva - will soon announce that more cosmic rays do, indeed, create more clouds in earth's atmosphere. More cosmic rays mean a cooler planet."

What do these results mean? Not allowed to tell you
By Andrew Orlowski


The chief of the world's leading physics lab at CERN in Geneva has prohibited scientists from drawing conclusions from a major experiment. The CLOUD ("Cosmics Leaving Outdoor Droplets") experiment examines the role that energetic particles from deep space play in cloud formation. CLOUD uses CERN's proton synchrotron to examine nucleation.
CERN Director General Rolf-Dieter Heuer told Welt Online that the scientists should refrain from drawing conclusions from the latest experiment.
"I have asked the colleagues to present the results clearly, but not to interpret them," reports veteran science editor Nigel Calder on his blog. Why?
Because, Heuer says, "That would go immediately into the highly political arena of the climate change debate. One has to make clear that cosmic radiation is only one of many parameters." 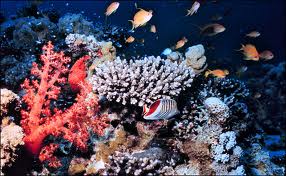 How often have you heard that due to Anthropogenic (man-made) Global Warming, the Great Barrier reef is in danger.


"Our great tourist assets are highly sensitive to climate change, the Great Barrier Reef to take one example. That's a wonderful natural asset for our country but it also supports around 60,000 jobs in the tourism industry."

In a media Release from Greg Combet:


"The Australian Government is committed to protecting the fragile eco-system of the Great Barrier Reef from the impacts of climate change and safeguarding the livelihoods of the industries and communities that depend on it," Mr Combet said.

Prominent reef scientist Ove Hoegh-Guldberg said in April the reef would die unless carbon emissions were dramatically cut within the next decade.

Now the Gillard Green Government can forget their worries (or is it their scare tactics) about the Great Barrier Reef. A new paper has been published:


What was learned
The three researchers report that the reproductive biology of the six coral species in the southern Persian Gulf "appears to be well adapted to extreme annual environmental fluctuations" and is "remarkably similar to conspecifics elsewhere in the Indo-Pacific (Baird et al., 2009a,b)," adding that "the adaptive capacity of corals in the Persian Gulf is likely facilitated by a combination of short-term acclimation in individuals during acute environmental conditions (e.g., recurrent bleaching events) and long-term adaptation among coral populations to chronic environmental conditions (e.g., extreme temperatures)."
What it means
In concluding their analysis of their data, Bauman et al. say their work "confirms that corals are capable of reproductive activities under extreme environmental conditions," as has also been found to be the case by Coles and Fadlallah (1991) and Coles and Brown (2003). Hence, they state that "coral populations can survive and proliferate in extreme conditions that are projected to occur in many other regions of the world by the end of this century," buttressing their claim with the statement that "the recovery of these coral assemblages following mortality induced by a number of recent temperature-related bleaching events (1996, 1998 and 2002) suggests these assemblages are also resilient to extreme fluctuations in water temperature," additionally citing in this regard the work of Riegl (1999, 2003) and Burt et al. (2008).
Posted by Geoff on July 23, 2011 1 comment: