Letter to editor by Leon Ashby - President -  The Climate Sceptics Party.
Dear Sir / Madam,
Those who saw the televised climate debate (View HERE) between Lord Monckton and Richard Denniss would notice these points:

Lord Monckton gave actual names of scientists (Lindzen and Spencer) who have shown the planet will not overheat from CO2 increasing in the atmosphere.
Richard Dennis gave no actual science, no reference to scientific papers - just appealing to "The supposed Consensus."

Monckton attacked consensus as just opinion and not real science - saying science is data and analysis and quoted his own peer reviewed paper as an example.
Dennis had no peer reviewed paper to quote but asked how can a majority opinion of politicians and science groups (groups that rely on taxpayer or alarmists leaning funds) be wrong?

If the press were doing their job they should have asked what groups that are truly independent of alarmist leaning funds support his view?

Monckton explained how a carbon tax will cost our economy billions and reduce the temperature of the planet by almost zero.
Denniss claimed it will be a wonderful insurance policy despite Australian industries and workers having to injure economic pain to achieve very little.
Leon Ashby
President,

The Global Warming Hoax: How Soon We Forget

From American Thinker By F. Swemson

Nobody has ever offered a more succinct indictment of the global warming hoax than H. L. Mencken, who said: "The whole aim of practical politics is to keep the populace alarmed (and hence clamorous to be led to safety) by menacing it with an endless series of hobgoblins, all of them imaginary."


Swemson talks about the America situation and then continues:


The truth is that CO2 is a beneficial trace gas that exists in such small quantities in our atmosphere, that the idea of it playing any significant role in determining our climate is simply silly.  CO2 comprises less than half of 0.1% of our atmosphere, and only 4% of it comes from human activity.  That's 16ppm, or 1 part in every 62,500 parts of our atmosphere.  CO2 is plant food, and a key component in all life on earth.  Plants need CO2 to grow and produce oxygen.  They feed animals (including ourselves).  Animals in turn consume oxygen and plant-based foods, and exhale CO2.  Without CO2, nothing could be green!  This brief video showing the effect on plants of increasing atmospheric CO2 is quite striking.
Ironically, the audacity of their lies about CO2 are overshadowed by the most obvious part of the Hoax.  The fact is that warming is good!  Throughout history, man, as well as all other living creatures, has thrived during the earth's warm periods, and suffered and starved during the cold ones, a lesson that we're about to be reminded of in the coming years. 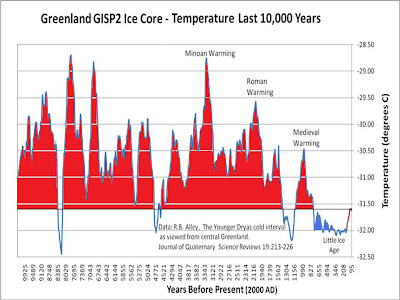 The Roman civilization arose when the earth was much warmer than it's been recently.  And it's no coincidence that just as the earth was entering the 400-year-long "Little Ice Age," the Roman Empire was overrun by the Huns.  The Egyptians also built the pyramids when it was much warmer than today, and the beginning of the industrial revolution coincided with the end of the Little Ice Age.  If global warming is such a problem, doesn't it seem odd that mankind has always flourished during the earth's warmest periods?

Australia gets a mention:


Australia just announced that they're going ahead with a carbon tax on their power companies, rather than a Cap & Trade system.  But no matter what they call it, they're still fleecing the same victims, the people, who'll be paying this new tax in the form of higher utility bills, and higher prices on everything they buy.  And while this insanity unfolds, we're still paying lip service to this absurd lie by continuing to make reference to the virtues of reducing our "carbon footprint."  Every time we hear that preposterous phrase, we should laugh at it, and then explain why we find it so funny if anyone asks.  Years of constant repetition is what sold the lie in the first place.  It may take years of constant repetition of the truth to counter it.


Richard Denniss argued with a tired old adage, borrowed from some of the paid  smogging sites about cancer and how if you shopped around the consensus would be that you needed some form of cancer treatment.

So, Mr Denniss, how about this? If, in the year 1980, you sought medical help for a peptic ulcer, the "consensus" would have been that they were caused by stress. You could go to doctor after doctor, specialist after GP and all would have said stress caused your peptic ulcer.

However two Australians, Robin Warren, a pathologist from Perth and Barry Marshall from Kalgoolie WA, isolated an up until then unknown bacterium:


By using technologies generally available (fibre endoscopy, silver staining of histological sections and culture techniques for microaerophilic bacteria), they made an irrefutable case that the bacterium Helicobacter pylori is causing disease. By culturing the bacteria they made them amenable to scientific study.

In 1982, when this bacterium was discovered by Marshall and Warren, stress and lifestyle were considered the major causes of peptic ulcer disease. It is now firmly established that Helicobacter pylori causes more than 90% of duodenal ulcers and up to 80% of gastric ulcers. The link between Helicobacter pylori infection and subsequent gastritis and peptic ulcer disease has been established through studies of human volunteers, antibiotic treatment studies and epidemiological studies.

Sometimes, Mr Denniss, a "consensus", like a verbal contract, is not worth the paper it is written IN. 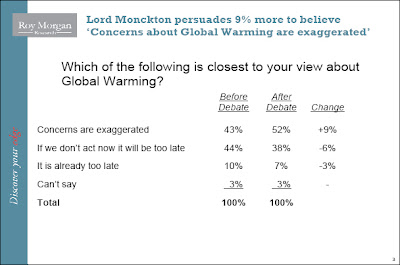