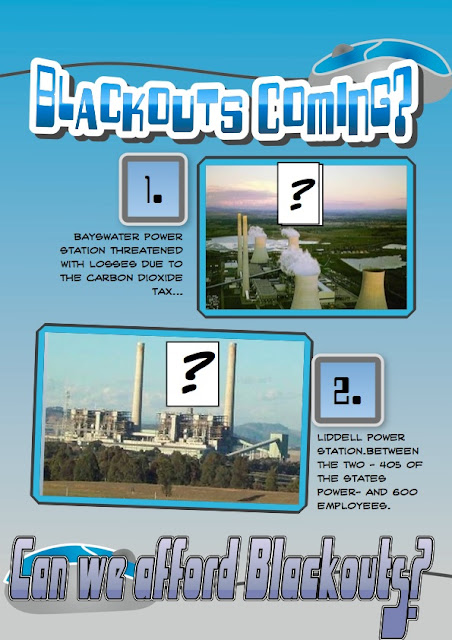 Under the recently released Green Gillard Government's MPCCC  Clean Energy Agreement, Hazlewood Power Station in Victoria is to close which will reduce Victoria's power output by 30%. As has been pointed out numerous times on this blog, renewable power sources

Maquarie Generation, a corporation owned  by the state of NSW,  operates Liddell and Bayswater Power Stations.  These two stations produce 40% of NSW’s power.

Will MacGen also go down the shute? Russell Skelton, the CEO of MacGen., recently wrote in the Newcastle Herald:


Our business spends more than $300 million a year on coal. The carbon (dioxide) price of $23 a tonne of emissions will mean we have an annual carbon (dioxide) bill of about $600 million, rising each year. No company can afford a near tripling of costs without taking a hit to its bottom line.

Although the GGG's Clean Energy Package offers compensation to industry, the Radical Red Greens (Julia described them as extremist!) have made sure that not one cent of compensation goes to black-coal generators.

If MacGen survives, your power bill will be greatly affected. Whether MacGen survives or not, your state taxes will have to increase. Last year MacGen returned $200 million to NSW state coffers.

The Daily Telegraph's  Simon Benson and Gemma Jones explain that local government taxes will also have to increase:

How much is that compensation package going to be, Julia and Bob?


The 50 worst carbon tax offenders and their carbon cost