You don't need a PhD to spot outrageously bad science 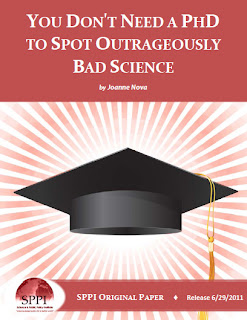 The three will also appear at the Hyde Park No Carbon Dioxide Rally at noon on Saturday.

√ Totalling the errors, the 21 PhD’s from BYU score minus 10 for logic and reason — a scandalous
deficiency in graduates with doctorates. Will BYU distance itself from such unscientific
documents and provide better training? Surely the university aims higher than this?

√ They provide no empirical evidence to substantiate the core EPA or IPCC claims that man-made emissions will drive up temperatures by 2 – 6°C by the time CO2 doubles.

√ Simply repeating the decrees of committees, without analysing the arguments and looking at
the evidence is the kind of shortcut we’d expect from high school students. It’s a lazy cop-out
for a journalist, let alone a scientist. Argument from authority is cheap spin. It’s fitting for
glossy brochures that sell holiday resorts (Did you know 84% of travel agents recommend
Wrangel Island?) but it’s the antithesis of open scientific inquiry.

√ Team BYU defend the undefendable — the scientists who hide data, lose records, and manipulate the peer review process. The BYU team make excuses for scientists who talk about ways to deceive the public and who discuss ways to dodge FOI laws. Why are they still defending a graph that was so inept, the researchers could have used random numbers instead of data and still “found” the same answer? The graph goes against hundreds of other studies, and was categorically dismembered in the peer reviewed literature.

√ The BYU team assume that international committees are producing honest unbiased work and would readily promote results which would ultimately render the committee itself unnecessary. Simple common sense.

The good name of science has been exploited by self serving bureaucrats and big bankers who stand to benefit from carbon based legislation and trading mechanisms4. Far from serving science, the BYU team break the most basic of science tenets and unwittingly act as foot-soldiers for the bureaucrats and bankers.
To show that HJR 12 is unnecessary, all the BYU scientists have to do is to substantiate the EPA’s claims. Everything less adds bluster, confusion or distraction to the task, a task that scandalously, damningly, apparently cannot be met.
The crumbling state of university science is laid bare in their letters. 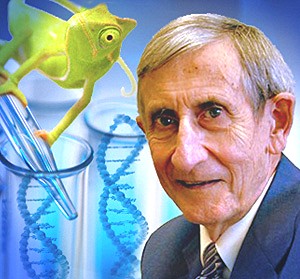 "Scepticism is as important for a good journalist as it is for a good scientist."

This is Freeman Dyson's parting thought in a series of Q&A emails between himself and The Independent's Steve Connor. (Link in title)


It seems to me that although there are still many uncertainties, much of the science of climate change is pretty settled, more so than you will admit to. To continue to report on "both sides" as you suggest is rather like ringing up the Flat Earth Society and asking them to comment on new discoveries in plate tectonics.

The Flat Earth Society reference should really be directed at the Alarmists. David Evans (Now touring Australia with Jo Nova and Lord Christopher Monckton) realised that the science had moved on when the  Ice Core Data show that the rise in temperature precedes the rise in atmospheric CO2


On global warming, public policy is where the science was in 1998. Due to new evidence, science has since moved off in a different direction.

The Intergovernmental Panel on Climate Change (IPCC), the UN science body on this matter, is a political body composed mainly of bureaucrats. So far it has resisted acknowledging the new evidence. But as Lord Keynes famously asked, "When the facts change, I change my mind. What do you do, sir?"


Among my friends, I do not find much of a consensus. Most of us are sceptical and do not pretend to be experts. My impression is that the experts are deluded because they have been studying the details of climate models for 30 years and they come to believe the models are real. After 30 years they lose the ability to think outside the models. And it is normal for experts in a narrow area to think alike and develop a settled dogma. The dogma is sometimes right and sometimes wrong.