Gillard's new Promise: Carbon (dioxide)Tax will not be permanent! 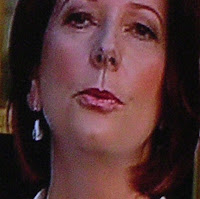 You heard it here first! Well, actually you heard it on ABC's Insiders first.


"has been saying a carbon (dioxide) tax will be permanent. That is not true."

Will this be her next pronouncement that will come back to bite her?
Posted by Geoff on July 03, 2011 1 comment:

Climate of Fear - The IPCC

Lord Monckton is touring Australia at the moment. Here he talks of the IPCC/Climategate scientists.

On Scientific Consensus: Unless you agree with the coterie of IPCC scientists, you can't be part of them. You will have your financing taken from you.

Lord Monckton tells of how the BBC sat on the Climategate story for twelve months. Our Main Stream Media have avoided stories that go against the AGW hypothesis.

How is it that out in remote NSW they know that the "Science is not Settled?"

The science is not settled

IAN CHUBB says the climate change debate is not about politics but science. Would that it were so.
But it is not that simple, for there really are two matters at hand, namely the science relevant to global warming and the principle of sound empiricism and calm rational thought to determine important affairs of state (politics).
Alas, in the public debate about global warming, these principles of sound science and sound governance have become entwined with political self-interest by well-funded lobby groups of both the ''save the world'' and ''let's make money'' variety.