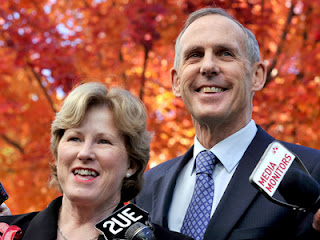 This morning on ABC's Insiders, Bob Brown said that Tony Abbott's proposed tax cuts would cut at least $15 billion from Revenue. He went on to say that therefore Abbott would have to cut jobs from Hospitals, Schools....


"Tony Abbott is aiming to put the burden onto households. And if those figures your panel was talking about are true, bang goes - he says, he's going to cut government services. Well bang goes 40,000 or 50,000 teachers, nurses.."

Does he not understand that Hospitals and schools are State responsibilities? How long has he been in Parliament now?


"Put all those together you're looking at minimum $15 billion-a-year missing from revenue. And that's going to be a cut to government services. It's got to be schools, hospitals, railways, defence."

One out of four, Bob. Defence is a Federal Government Responsibility. The other three, schools, hospitals, railways  are State Responsibilities.


He also said that the carbon dioxide tax would have negligible effect on the rich coal mining companies but later in the interview said some of those same companies would have to close down as that is the purpose of the tax.


Oh, look Barrie, all the estimates of the impact of a pricing scheme like this on coal are down there in 1, 2, 3 per cent on their profit line.


But when you say negligible impact do you also say then that no coal mines will closed?

BOB BROWN: I would expect that in the future we are going to see some of the most polluting enterprises in the country have a struggle. That's the nature.

Bob also said that we were way behind Germany and China. Wake up and smell the roses, Bob.

Dr David Evans, who was a climate change adviser to the Howard and Rudd governments, said it would take less than five days at current emission levels for China and India to spew out 100 megatonnes of CO2 - the approximate amount that Australia aims to save annually by 2020. By that time, Australia has pledged to cut emissions by between five and 15 per cent relative to 2000 levels.
(Dr Evans will be touring with Lord Monckton, speaking in Perth 4th July, Newcastle 6th July, Sydney 7th July, North Sydney 8th July and at an Anti-carbon dioxide tax rally in Hyde Park at noon on the 9th July.)

Bob Brown closed by saying that Tony Abbott doesn't understand consensus. Do you, Bob? You have often mentioned the "scientific consensus" which is an oxymoron!