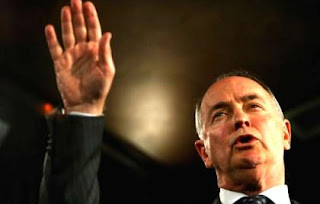 Today there will be a barrage in the Main Stream Media (MSM) against Lord Monckton who said, whilst displaying a Swastika, that Professor Garnault had a fascist point of view.


Wait for the feigned cries of "shock," "horror" and "How could he!" from all of the left-leaning press.


However, did we hear a lament from the MSM over the exploding pig that used to be on Your ABC's children's pages?

Did we hear even a peep from the press when the Alarmists released a video in which children who expressed anti-warmist views were blown up?


What did the MSM say about these climate Alarmists?


Jill Singer:" I'm prepared to keep an open mind and propose another stunt for climate sceptics - put your strong views to the test by exposing yourselves to high concentrations of either carbon dioxide or some other colourless, odourless gas - say, carbon monoxide."

Reminiscent of the Nazi death chambers.


Richard Glover said: "Surely it's time for climate-change deniers to have their opinions forcibly tattooed on their bodies."

Even Elizabeth Farrelly used repugnant imagery re Climate Sceptics: "They are the cane toads of contemporary culture: ugly, ubiquitous, toxic to most other life forms and adept at using their peculiar behaviour to force change in ours."

Again,  when these offensive remarks were published, there was no response from the MSM.

Incidently, when the Climategate e-mails such as the travesty re the lack of warming,  hide the temperature decline etc etc were leaked, the MSM again were found wanting by non-publication of the frauding of the science.


So, was Lord Monckton wrong?  He definitely attracted attention to the Climate Realist point of view. How accurate were his remarks? Garnaut IS acting in a ‘fascist’ manner in that he is expecting everyone to accept authority without question.

I think that Lord Monckton’s description is pretty much valid. The discussion about Mr Garnaut’s personal plans is legitimate because he is just way too important in Australia....
Garnaut’s report wasn’t considered an assault on democracy just by Lord Monckton but even by completely mainstream political leader of Australia, Tony Abbott, see:
http://www.australianclimatemadness.com/2011/06/garnaut-report-an-assault-on-democracy/

Lord Monckton asked the question whether Garnault’s words and actions may be understood as fascism and he has decided that the answer is Yes. And I understand where Lord Monckton is coming from. Now, I also know that the alarmists would love to link the skeptics to many bad things, including the Nazis, but there’s still a difference. What Lord Monckton says is supported by some facts and tight analogies – actual plans how to reorganize the (Australian) society; what the alarmists are saying is not supported by anything.

In an almost perfect inversion of normal usage, Garnaut trashes anybody who objects to a big, new tax as a sectional interest, whereas, in perfect socialist European terminology, those in favour of a giant new tax are supporting "the national interest". In his deeply flawed report, Garnaut gives almost perfect Australian expression to the European sensibility. Garnaut's description of the international environment is wilfully misleading and flatly contradicted by the much more impressive Productivity Commission report.


There is also something profoundly offensive to democratic practice in the way the Gillard government has shovelled out vast amounts of public money to long-term friends of the Labor Party, such as Garnaut and Tim Flannery, so that, with a wholly spurious and confected institutional credibility, they can declare: government good, opposition bad.

Christopher Monckton has apologised. The apology will be printed in the Sun-Herald on Sunday.


“Let me begin with an unreserved apology. In a recent lecture, I should not have described the opinions of Professor Ross Garnaut, the Australian Government’s climate economist, as “fascist”. I apologize humbly. Will there be similar apologies from those who have called us “climate deniers” or “denialists”, or who say we should be tattooed with our opinions, or imprisoned, or barred from Australia, or tried for “high crimes against humanity”?”

Was Christopher Monckton over the top? Perhaps. Was he justified in his statements? Certainly.

Better yet, why not judge for yourself. Lord Monckton will be speaking around Australia soon. For tour dates and tickets see HERE