Letter to the Editor  -  by Leon Ashby 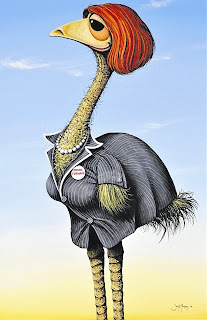 
Dear Sir,
Have you noticed how inconsistent positions seem to be the rage.?

Steve Fielding is sceptical of a need for a CO2 tax, but isn`t going to support a plebiscite vote that could end its progress.
Julia Gillard wants a consensus on a CO2 tax before it comes in but will not allow Australians to vote on it before it comes in.
The Greens love plebiscites except when someone else suggests one and
Tony Abbott wants a plebiscite but won`t be influenced by its verdict.

However I think most would agree a plebiscite is far better value than actors, economists and others spouting "paid rhetoric" at us.

Maybe we could get better value from a $80 million dollar plebiscite and have another question to clarify the issue further e.g.
Personally I love the idea of the parliament hearing the will of the people and just like undie changes - the more often - the better.