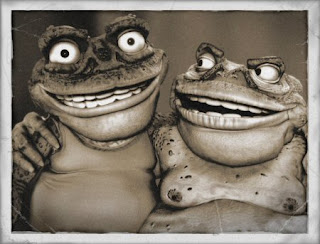 Writing in the National times section of the Sydney Morning Herald, she says: "Cane Toads  of the air thrive on stupidity."
I am always amazed by how readily Fairfax's journalists think they can press our buttons. Fairfax are deniers of the "science" of Anthropogenic Global Warming. It's not so much that they're rude, lowbrow or just plain wrong, although these, too, are often the case. The most destructive effect of the journalariat is the poisoning of the logic-well itself; followed by the incremental death of the argument tree that is root and branch of intelligent civilisation.


Take Alan Jones. Though it pains me to say it, he is forcing me to change my mind. Not on climate change, or cycling, or the right to public protest, all of which he opposes, but on censorship.

Do you know Alan Jones' position on  climate change, or cycling, or the right to public protest, Elizabeth?

I can't speak for Alan but having listened to him,

Have you listened, Elizabeth?


Foucault argued that unreason died with the enlightenment. But the shock-jock phenomenon proves repeatedly that if you make an argument sufficiently idiotic, the sheer scale of stupidity makes it hard to defeat.

I would think that Foucault could have meant the Main Stream Media who have a very blinkered view of the AGW debate. Over the last few weeks, Alan has interviewed eminent climate scientists who have exposed the AGW hoax? Did you listen to these interviews, Elizabeth?
If not, why not enlighten YOUR unreason.
Interviews of Richard Lindzen here and Tim Ball here. Alan has also interviewed Vincent Gray here. (Many of Vincent's newsletters are reproduced on this blog.)
Australia's Panasonic Climate Commissioner Tim Flannery acknowledges that Richard Lindzen is a foremost authority of climate. Tim Flannery's credentials have been constantly challenged, the latest being a new text - The Weather Makers Re-examined. The Weather Makers is shown to contain
Farrelly continues:


The rules of logic are not difficult. As taught to philosophy sophomores, they cover deductive and inductive reasoning, true and false syllogisms, building arguments with consistency, validity and soundness and - crucially - how to spot a fallacy. Pretty basic.

If only the reptiles of the press would apply some logic to the AGW debate. Why do they constantly not report stories that go against the falsified AGW hypothesis?
The MSM have failed in an evenhanded reporting.  .....how to spot a fallacy. Pretty basic.