You have been conned. 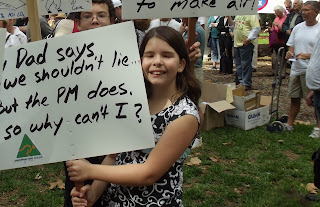 John Connor, speaking in Adelaide on Sunday, continued the fear campaign - the say YES campaign. The say YES to a tax that will harm Australia raise household expenses and will do nothing to reduce pollution. In fact the tax, is NOT on "Pollution" as Mr Connor states it is a tax on an essential trace gas in the atmosphere - carbon dioxide. Carbon dioxide is less than 0.04% of the atmosphere. But it is not a tax on ALL that small percentage, the tax is not on the 97%of CO2 that is created by nature, it is only on the 3% emitted by humans, or 3% of 0.04% or 0.0012%.

Mr Connor, you are conning us. Mr Connor would not defend his part in the fear campaign of the Cate Blanchette piece -

As Andrew Bolt says above: "You have been conned." Now where have I heard the "conned" word before? Oh yes, in the TCS election campaign.