We went to an election a year ago with Ms Gillard's Labor Party and the Lib/Nat Coalition all saying there would be no carbon tax. Labor won 38.0% and the Coalition won 43.7% - a total of a whopping 81.7% of the vote.


That is what I would call a mandate for NO CARBON (dioxide) TAX. 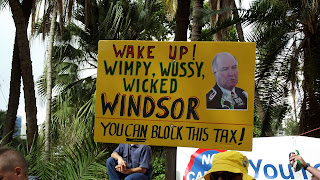 Of the others, I couldn't be sure but I didn't hear Wilkie, Oakeshott or Windsor calling for a carbon dioxide tax either.

So the No Carbon (dioxide) Tax mandate has been mutilated by the Gillard/Greens Government.

Today we had YES rallies in all state capitals. Were they saying YES to a new election? (link)

No. They were saying YES to MORE TAXATION.  As the AGW-Pushers at Fairfax Media reported:

Climate activists say momentum is building in a community campaign for a carbon tax as thousands of people rallied in support of putting a price on pollution.

Why do they say mendaciously that the tax is on carbon when they mean carbon dioxide? Because, when the refer to carbon, they can do dishonest advertisments like the Cate Blanchette/Michael Caton grimy deceiving ad by grimy deceiving people. (Tell 'em they're joking, son! No, tell them they are lying, Michael!)

They rallied in support of putting a price on pollution? Is that True? If it were, I would support that.

Or did they want to put a tax on essential-to-life carbon dioxide?

Mr Henry said the majority of Australians wanted action on climate change, as shown by tens of thousands of people turning out for Sunday's "Say Yes" rallies across the country.

Well, we've already had an election showing that more than 80% are against a CARBON DIOXIDE TAX.  A Mandate.

If the leaders think that the electorate has had a change of mind, bring on a new election.

Rising sea to swallow our coast, thousands of homes at risk and they show Bob Cole sitting on a chair on the precipice, presumably waiting to drown. So is this true? Are the seas rising at a dramatic rate? Has the rise that, a week ago was 0.5 metres with an upper level of 1 metre, been increased in the last week to the 1.1 metres quoted by the Daily Telegraph? (with sea level rises of 1.1m predicted as "the worst-case scenario" by 2100.)

Or do we believe the data? From World Climate Report:

See also - The Great Sea-Level Humbug: There is no Alarming Sea Level Rise.

The Daily Terror goes on to say:

Climate Change Minister Greg Combet told The Sunday Telegraph a new report warns doing nothing is not an option, with up to 274,000 residential homes at risk.

Presumably, of those 274,000 residents at risk, one is Greg Combet's New Luxury beach front house in one of Newcastle's most exclusive suburbs, 10 kilometres outside his blue-collar seat of Charlton. Really, Greg, pull the other one, mate.

If you believed your propaganda, would you have paid just under one million bucks for your investment?

Oh, and Greg. are you going to tell Al Gore a few of his properties are at risk? O.K. Forget Al Gore.

Are you going to tell Dubai that all of Dubai is at risk?