Prophets of Doom or should that be Profits....

Stanford's Paul Ehrlich announces that the sky is falling.
“We have about five more years at the outside to do something.”
• Kenneth Watt, ecologist

“Population will inevitably and completely outstrip whatever small increases in food supplies we “make. The death rate will increase until at least 100-200 million people per year will be starving to death during the next ten years.”
• Paul Ehrlich, Stanford University biologist

“By…[xxxx] some experts feel that food shortages will have escalated the present level of world hunger and starvation into famines of unbelievable proportions. Other experts, more optimistic, think the ultimate food-population collision will not occur until the decade of the 1980s.”
• Paul Ehrlich, Stanford University biologist

“By the year XXXX, if present trends continue, we will be using up crude oil at such a rate…that there won’t be any more crude oil. You’ll drive up to the pump and say, `Fill ‘er up, buddy,’ and he’ll say, `I am very sorry, there isn’t any.’”
• Kenneth Watt, Ecologist

“It is already too late to avoid mass starvation.”
• Denis Hayes, chief organizer for Earth Day“

“We are prospecting for the very last of our resources and using up the nonrenewable things many times faster than we are finding new ones.”
• Martin Litton, Sierra Club director

“The world has been chilling sharply for about twenty years. If present trends continue, the world will be about four degrees colder for the global mean temperature in 1990, but eleven degrees colder in the year 2000. This is about twice what it would take to put us into an ice age.”
• Kenneth Watt, Ecologist

The above were predictions made for Earth Day, 1970. They were collated by I hate the media for Earth Day 1970. These same deluded people have just celebrated?? Earth Day 2011 on April 22nd.
The question marks after "celebrated" are because, if you are preaching Gloom and Doom, do you "celebrate" or you do the reverse?  So I looked for antonyms for celebrate and got:

So, I recommend, seeing celebration of an impending disaster  seems inappropriate, they should disregard it, they should forget it, they should ignore it.....
Two of the comments above had their dates xxed out. The small xxxx's represented 1975 - by 1975 there would be world hunger, the large XXXX's represented the year 2000.
My attention was drawn to this article by Peter Laux. These doomsayers are invited to share in Peter's $10K challenge mentioned on this blog HERE and the challenge issued on Denis Rancourt's Climate Guy HERE.

BY DENNIS T. AVERY
CHURCHVILLE, VA—U.S. Energy prices have risen to more than 6 percent of consumer spending—which may be a historic “tipping point.” Our food prices, meanwhile, have had their steepest increase in a generation, to about 6.5 percent of spending. That’s a double whammy consumers haven’t suffered since Jimmy Carter’s infamous “stagflation,” a painful mix of weak economic growth, high unemployment, and rising inflation in the late 1970’s.

Both the high oil prices and the high food prices trace directly back to the Obama Administration. Oil has gotten no scarcer during the Obama years, but the dollar has weakened by about 17 percent. The price of oil is denominated in U.S. dollars, so the dollar decline almost exactly matches the rise in America’s oil prices. Meanwhile, the President has engineered a stop-stall on domestic energy production, from Alaska to the Gulf, making even our own oil more costly.

Some months ago I sat at an energy roundtable with http://www.hudson.org/i of Massachusetts (of Waxman-Markey cap-and-trade fame), the President of Duke Power, and the former director of President Clinton’s Council on Environmental Quality. The sympathy at the table was for rigging higher natural gas prices so the huge federal subsidies for wind turbines and solar panels would seem less a drain on our economic growth.

Recently, moreover, the Congressional Research Service reported the U.S. has more fossil energy than any other nation when we total our coal, oil, natural gas, and our new shale gas and oil reserves. Far from having “just 2 percent of the world’s oil reserves” we have centuries worth of fossil fuels—which the Obama administration is committed to not using.

The food inflation too is now Obama’s. Under both Bush and Obama, the federal government has cheerfully diverted huge amounts of grain to auto fuel, creating an artificial food shortage. That’s triggered food price inflation for the poorest around the world. Corn ethanol may be “renewable,” but the subsidies make it very expensive to use.

Why not remove the federal subsidy and let ethanol compete? Mainly because ethanol isn’t competitive 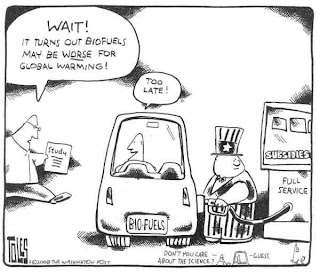 or effective. And it is down right disastrous for the environment. Right now, farm woodlots are being drained in the Corn Belt, and tropical forest is being cleared for more corn and palm oil in Southeast Asia, responding to high crop prices. This is not a sustainable solution.

Last year, Stanford University praised Norman Borlaug’s Green Revolution for saving about 7 million square miles of wildlife habitat from being plowed for more low-yield crops. Without the higher crop yields, we’d have gassed off soil carbon—as nitrous oxide—equal to one-third of the world’s industrial emissions since 1850!  The Stanford message is clear: don’t clear wildlife habitat for trivial purposes. And this seems a trivial purpose—whether or not you believe in man-made global warming. Ethanol won’t make much difference.

Why not clean-burn coal, gas, and oil to make the electricity we need and admit the “green” solutions so far just don’t work. Trillions of taxpayer dollars are poured into wind, solar, and ethanol and none has proved to be an effective means of producing energy.

If the goal is to reduce CO2 the effort has not only failed, but the need is appearing less and less valid. Thus far, the computer models have been wrong. The Pacific Ocean, our largest heat sink, has entered a cool phase, and the tree rings and coral samples tell us it will probably last for the next 25 years.

Dennis T. Avery, a senior fellow for the Hudson Institute in Washington, D.C., is an environmental economist. He was formerly a senior analyst for the Department of State. He is co-author, with S. Fred Singer, of Unstoppable Global Warming Every 1500 Years. Readers may write to him at PO Box 202 Churchville, VA 2442; email to cgfi@hughes.net. Visit our website at www. cgfi.org (Link in title above)
Posted by Geoff on April 26, 2011 No comments: