Letter to the Editor by TCS President Leon Ashby.
Is Combet's CO2 tax a con job on voters 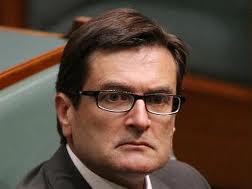 I believe Greg Combet is trying to bribe us voters with promises that a CO2 tax with compensation won`t cost us much.
I therefore have these questions for the Climate Change Minister.

Is the CO2 tax a con job that traps unsuspecting voters of future rises in costs without increasing compensation ?

According to a leaked Frontier modeling report, it will cost Australians an average $4,500 per person per year for 40 years to achieve an extremely small reduction in Global temperatures and sea levels.
When businesses apply for funds, they have to demonstrate value for money with a figure. Can you demonstrate value for money for the CO2 tax with a figure of Dollars per cm sea level rise prevented?

There are predictions by solar sunspot researchers such as David Archibald using 300 years of sunspot data that the next decade will be 1.4 degrees to 2 degrees C cooler than the last decade.
The correlation holds very consistently. As Climate Change Minister, have you looked at this research?

There is also research showing the SOI (Southern Oscillation index) has a predictive correlation with world Temperatures (see graph below)
Do you have better predictive models than these pieces of research and if so what is it?
If not why do you think climate change is mostly due to CO2 levels?

Photos and Graphs below 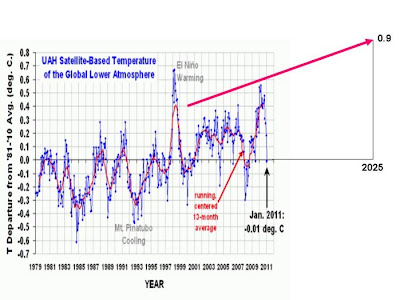 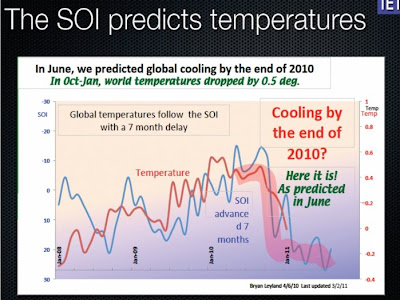 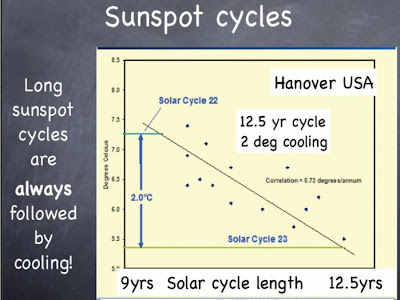 I recently sent two letters to the Multi-Party Climate Change Committee and copied each member of the committee. (Here and Here) I have yet to receive a real answer to either. I received a generic -thanks we'll get around to answering from the committee and getting many e-mails - will get round to yours eventually from Oakeshott's office. No real answer. Part of my first unanswered e-mail included:


Can anyone on the committee please explain why, if Australia cuts its man-made emissions by 5% it will mean that the world-wide emissions will be reduced by $0.000000etc... Google it!

Atmospheric CO2 is less that 0.04% and the man-made emissions are around 3.4% of that. Australia's proportion is about 1% of total man-made emission and Julia and Bob want to kill Australia's international trading position for ( you can work it out on your calculator)
CO2=0.04x3.4%x1%x5%.  Is that going to make a difference?

I cannot watch Terrible Tony smarming away on QandA. My TV set would not last the night. However, one of our members has pointed out that a couple of good questions were made on QandA 12/4/11.


I recommend you review the program from the 51 minute mark.
Jones, Wong and Hunt were all disgraceful in dismissing the science even though Carly Abrams quoted from the latest IPCC Report.
Nobody addressed her second question which was: “Why aren’t Australians getting a vote on this really important question?”

Tony: Our next question tonight comes from Carly Abrams(?)

Carly: Hi, I’m a scientist, I’m not part of any political party   but I think my concerns represent a growing proportion of the general scientific community. When you take inot account natural sources of carbon dioxide like animal respiration and evaporation of the oceans, then fossil fuel burning only makes up 4% of total global carbon dioxide emissions, and Australians make up 1% of that 4%  these are going from statistics from the latest IPCC report. If this is the case then Australians only release a total of 0.04% of all emissions and how is there any evidence that a billion dollar carbon tax is going to make any significant difference on the environment and secondly, wht aren't Australians getting a vote on this really important issue?

Tony says to Greg Hunt: I take it that you would reject the premise of that question? To which Greg Hunt said he respectfully disagreed with the position in terms of the "science." Greg mentioned that, over the next four years the carbon (dioxide) tax is going to be $40 billion.
Although Carly relied on the IPCC figures, Penny Wong also said that she didn't agree about the "science"(Don't you normally rely on the IPCC, Penny?) and there was a side-track with Hunt and Wong likening the other side to Nazis and Wong startewd talking budgets. Tony interrupted and said: "She asked the final part of her  question is why is the Australian public not being allowed to vote?"

Penny Wong answered: With respect you did! Oh rea;;y, Penny? There will not be any carbon tax - was Julia Gillard's pre-election pronoincement. THAT is what was voted on.

Carly countered: "If you had gone to the election with this climate tax, you would not be in governemnt right now."

You're a hero, Carly!