Labor powerbroker Joe de Bruyn, a member of the ALP national executive and head of one of Australia's largest unions, the Shop, Distributive and Allied Employees Association, supports The Green/Gillard tax on carbon dioxide. He is quoted in the Sunday Telegraph (link in title) as saying:  "Who understands how the carbon tax works? Do you? I confess I don't."

Perhaps Mr de Bruyn should be asking, on behalf of his members, what effect will the carbon dioxide tax have on employment prospects. I am sure Mr de Bruyn is not a fan of big business. After all his years in the unions, he should realise that Big Business has no loyalty to Australia. If an inhibiting carbon dioxide tax is imposed on them, they will locate off-shore to some of the many countries that do not have a tax based on a falsified hypothesis.

Mr de Bruyn has previously warned the Gillard Government that they are courting ''electoral suicide by promoting the Greens' agenda, including yesterday supporting consultation on gay marriage."

''The government appears to be allowing the Greens to set the agenda in Parliament,'' he told The Age last November. Why then is he supporting the Greens' crazy carbon dioxide tax against the interests of his members and their futures?

Was Mr de Bruyn's Union one of the six unions who financed the rabid GetUp?

I could ask Simon Sheikh the same question. Why are you promoting a tax on carbon dioxide. It will penalise the jobs future of its funding union members. It will raise the cost of living for all Australians. Even if the "science" is trustworthy, and that's a big IF, it will not make the slightest difference in average Global temperatures.

The treasury calculations are saying that, at $30/tonne it will cost each household $863 pa. I believe that the treasury figures are conservative. The treasurer, poor old Wayne (Carbon tax hysterical idea) Swan doesn't trust his own treasury.

Many commentators and academic (Lenore Taylor, Dennis Shanahan, Dr Frank Jotzo ) say that it should be at least $60/tonne. That's double the treasury calculations tax amount.
Posted by Geoff on April 03, 2011 No comments:

An extract from Andrew Fowler's new book published in The Week-end Australian Magazine has some interesting parallels with our debate.


DANIEL Ellsberg wasn't a typical dissenter: Harvard-educated, he had served two years in Vietnam as a civilian in the State Department and earlier worked for the Pentagon on nuclear weapons policy. Unable to remain silent about the White House’s belief that the war was “unwinnable”, in 1971 he leaked the Vietnam history, known as the Pentagon Papers, to The New York Times and other US newspapers, defending his actions as upholding the highest principles of the US Constitution.

Ellsberg was tried under the US Espionage Act and the trial was thrown out of court. Here is the interesting bit: The US Supreme Court ruled that only a free and unrestrained press could effectively expose deception in government. Think about that in relation to Australia and the way the Government has been lying to the people. Unfortunately, our free press seems complicit in the cover-up.


(Daniel Ellsberg) had a system of decision-making called the Ellsberg Paradox named after him. It was a theory that demonstrated how people are naturally risk-averse and prone to making decisions based on a hazard that doesn’t exist. 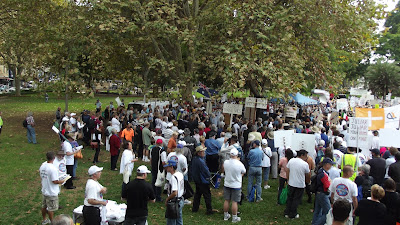 In Australia, there is no greater example of  people who are naturally risk-averse and prone to making decisions based on a hazard that doesn’t exist. Carbon Dioxide is innocent. Carbon Dioxide is not creating any runaway global warming. The Greens have been scaring people into thinking that carbon is going to send our planet to hell in a hand basket. Today, in Hyde Park,  I was assailed by a young female paramedic who has been taken in by the hoax.  She was all for a carbon tax. She pulled out the line that we sceptics were trying to ruin the future for her young son.

The really unfortunate thing is that, if the Gang-Green get their way, her child's future will be much worse. High unemployment prospects due to employers relocating off-shore, uncertain power supply due to the vagaries of renewable energy, uncertainty as to food supply as the gang-greens chase farmers off the land.

If we only had a free, enquiring, unrestrained press, they would expose the deceptions of the Greens and the Government.